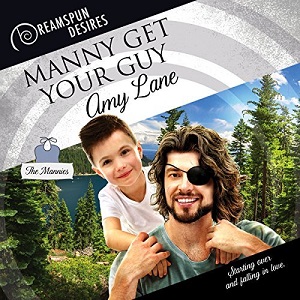 Title: Manny Get Your Guy

Blurb: Starting over and falling in love.

Tino Robbins’ sister, Nica, and her husband, Jacob, are expecting their fifth child. Fortunately, Nica’s best friend, Taylor Cochran is back in town, released from PT, and in need of a job.

After years in the service, and recovering from grave injury, Taylor has grown a lot from the callow troublemaker he’d been in high school. Now he’s hoping for a fresh start with Nica and her family.

Jacob’s cousin Brandon lives above the garage and thinks “Taylor the manny” is a bad idea. Taylor might be great at protecting civilians from a zombie apocalypse, but is he any good with kids?

Turns out, Taylor’s a natural. As he tries to fit in, using common sense and dry wit, Brandon realizes that Taylor doesn’t just love their family – he’s desperate to be part of it. And just like that, Brandon wants Taylor to be part of his future.

Review: Manny Get Your Man is the second book in Amy Lane’s series, The Mannies. I suppose that this does work as a standalone book, but I think that you really need to get acquainted with first book if you haven’t already. If nothing else you’re doing yourself an injustice by not reading an excellent book. Manny Get Your Man features a lot of characters from The Virgin Manny and is set about 10 years later, so you find out about all the characters (major and minor) we fell in love with in book 1. In fact, the first sentence of the blurb does assume that the reader has read the first book.

I really loved Manny Get Your Man. Taylor and Brandon’s story was just… awesome. We met Taylor back in book 1 – he was the obnoxious, brash best friend of hero Tino’s (The Virgin Manny of the title) sister Nica, who hit on Tino while Tino was busy getting his HEA with Channing. But 10 years later and after a stint in the military, Taylor has grown up – A LOT – and starts his journey of redemption (at least for the reader). Taylor is returning home after recuperating from injuries and his job is to be the manny for his best friend Nica, who is about to have her 5th kid with her brother’s best friend, Jake. It is here that Taylor meets Brandon, who lives in the garage apartment of his cousin, Jake.

I know, it’s a tangle. I won’t stop you from getting a paper and pen out to draw the family tree.
I absolutely loved this story. John Solo’s narration of the book is wonderful to hear, but then again, I think I could listen to almost everything narrated by John Solo and be exceedingly happy. That man can narrate a book like nobody’s business.

If there was one criticism it is that unlike book 1 where Sammy (Tino’s charge) was a major character of the book, Nica and Jake’s kids are not really characters, only occasionally getting the spotlight with their manny. Though I must say, this would have been tricky to work through with that many kids… seriously, five kids before 30! But with my belief suspended, I fell in love with both Brandon and Taylor. Their story is beautiful, and it was just awesome to be able to revisit old friends. The guys just clicked with their chemistry and were super relatable.