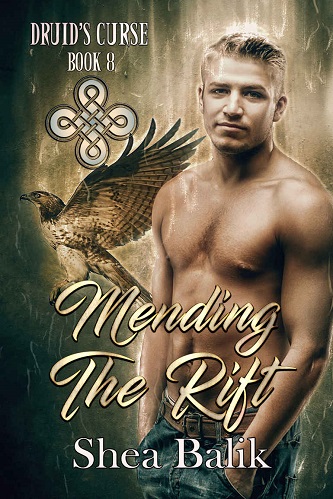 Blurb: The END is NEAR!

The Fae must be defeated if Brandr and Logan hope to find their happily ever after. Only by working together will have any chance of Mending the Rift and saving humanity.

The end would be upon Brandr and his friends soon. The only question, would Brandr be able to find his fated one in time? He feared he was too late when he arrived to find the field empty. Then the Veil opens again and hell rains down upon him as the Unseelie pets attack. But when Brandr was too injured to move, the Druid he was destined to claim as his own flees in terror. Talk about demoralizing.

That did not happen. Not even in some weird fantasy could Logan have imagined that a dead man could come back to life. And he had definitely been dead, since Logan had to put his head back on his body. But when he was faced with the truth, that the man was immortal, Logan has to admit to being…intrigued.

But as Samhain draws closer, the danger around them increases as the Fae converge. The Fae must be defeated if Brandr and Logan hope to find their happily ever after. Only by working together will have any chance of Mending the Rift and saving humanity.

Review: This story was so good with the addition of Logan and the new kids. I loved Brandt and Logan together. Logan’s power was off the charts and very much needed in this addition. As with the others in the series you get a well written beautiful story about druid’s needing to stop the fae from coming through a rift and taking over. There were heart stopping moments that had me on the edge of my seat.

A lot happens throughout. There are twists and turns that I thoroughly enjoyed. I am sad this is the last book. I wanted more about Fen considering Aed cursed him as well. Even though he helped the vikings he was more in the background. I wanted to know how he escaped the fae. Is there a love interest for him, as eternity is a long time to spend alone and Aed never said in the curse he could not find someone for him.

I loved the entire series. Each druid possess a unique ability that will help mend the rift. But Logan was the last one needed to accomplish this. A Fantastic end to an amazing series.