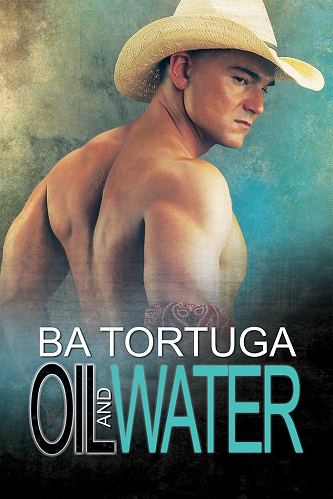 Blurb: Oilman Max inherits a passel of trouble when his boss passes away and leaves him a house in England, a family full of squabbles, and a heck of a lot of money. He’s thinking London is the worst place on earth… until he meets Morgan.

Colorful, carefree, and a little crazy, Morgan is just what Max needs, and the two set out on the adventure of a lifetime, chasing pleasure wherever it takes them, learning that together they can make anything fun… and sexy.

Too bad reality has to set in, and Morgan’s multimillionaire father has a lot to say about what reality looks like. Will their different worlds conspire to separate them like oil and water?

Review: This was an interesting experience for me.

Oil and Water is the first book in BA Tortuga’s Wildcatters series, originally published in 2006 by Torquere Press and second edition published by Dreamspinner in 2019. Over the past year I have found a great appreciation for Tortuga’s writing, although there was part of me that was sure I had read stuff from the author by Torquere Press in the past (before finding Dreamspinner Press authors, I read a lot of Torquere Press). It was something that niggled at me although I had found that I loved pretty much everything I’ve read by Tortuga released by Dreamspinner. Which made it interesting. I have now had the epiphany that while I love Tortuga’s recent stuff, I struggled with her earlier stuff (i.e. the books published by Torquere press).

The story is about Max and Morgan, who are both obscenely rich which is what makes the stories and its numerous settings possible. Max is the Oilman of the story; he’s inherited land in England and has had to travel over the pond to deal with the issues surround his new inheritance. He’s a fish out of water and doesn’t belong in England. But things look up when he meets Morgan. Morgan is laid back and his carefree lifestyle is funded by his millionaire father. He is all about where the next adventure takes him and is a breath of fresh air into Max’s more structured life. As soon as they meet each other the crazy whirlwind of adventure takes off. The guys travel together, having sex in just about every location, until Morgan’s father brings reality crashing down. Apparently, you can’t live a carefree, adventurous life forever. Now Max and Morgan have to figure out where their next adventure together takes them.

After reading Oil and Water I’m now sure that the massive change in my interest in Tortuga’s writing was the style itself back over ten years ago. While I enjoyed the story and despite being well written, I found it difficult to connect to and get really stuck into the story and the pace was too slow. In the end it boiled down to that I feel that this was a story of a couple of spoiled men just bumming around, travelling and having sex.