Hi guys! We have M.D. Grimm visiting today with her upcoming release On Wings Of Passion, we have a short guest post with an exclusive excerpt, so check out the post and enjoy! ❤ ~Pixie~ 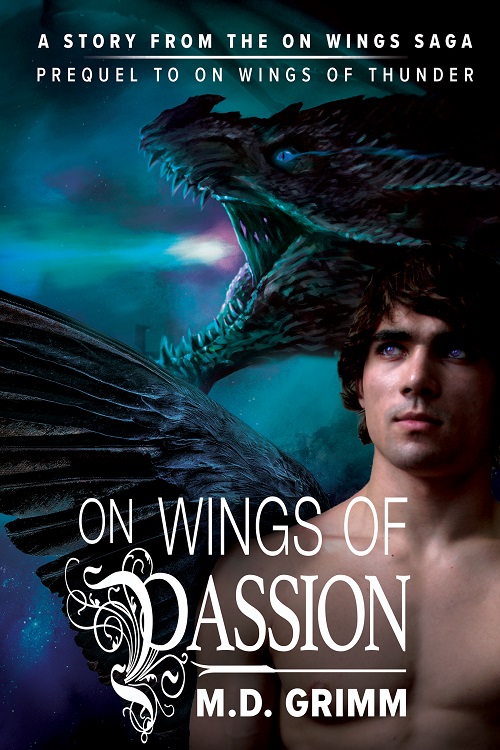 On Wings Of Passion

(A Story from the On Wings Saga)
by

Prequel to On Wings of Thunder

Every story has a beginning….

Dragons. Angels fear them and demons follow them. Formidable beasts of incredible power, they fight each other to the death for dominance. But dwindling dragon numbers cause alarm among the angelic ranks. Surely when the dragons have finished killing each other, the victors will search elsewhere for conquest… maybe even the Upper Realm.

Roland, an angelic artist of significant talent, doesn’t know what to believe. Part of him longs to see a dragon in person, and his peaceful life of contentment is wearing thin. He wants passion, desire, adventure, and love. He gets more than he bargained for when he and his sister are ambushed and captured by demons, and they bring him to a creature who surpasses Roland’s wildest imaginings.

But the mighty dragon Asagoroth is not all that he seems. Something sparks between him and Roland. Something neither anticipated. Something that will shake the cosmos to its core. Good day! M.D. Grimm here with an exclusive excerpt for my newest release “On Wings of Passion.” I want to give a big thanks to Pixie for hosting me today.

“On Wings of Passion” is the prequel to my surprisingly popular story “On Wings of Thunder.” It tells the story of the great dragon Asagoroth and his first angel love, Roland. I greatly enjoyed writing this story. It’s probably the fastest I’ve written a story in a very long time.

I am fascinated by the world of Asagoroth and his angels and I didn’t realize how much I missed it until I returned to it. It was a delight to revisit Asagoroth and write about him before he met Trystan, when he was still young and unaware of the way love can change and better someone. When he met Trystan he was rather bitter and wrathful. However, when he met Roland, he was just a dragon with a single goal—to rule the three realms and dominate all the demons and angels to his rule. The soldiers tightened their ring around Roland and Anpiel. Zander unsheathed a second sword and tossed it behind him, and Anpiel caught it, brandishing it with apparent knowledge of how to use it. Roland wasn’t so lucky. He didn’t know a thing about fighting. He clutched his heavy bag in one hand, gathering the strap in the other. He could bash a few heads if he needed to. The demons worked in tandem, spreading out their forces, encircling the angels. Weren’t they supposed to be fickle brawlers, not coordinated hunters?

Roland turned so he was back-to-back with Anpiel, their wings brushing roughly against each other. He gazed in awe at their attackers. Some had skin as black as coal, others were deathly pale, eyes sunken in their heads. Some had long hair, others short, and yet others had the sides of their heads shaved and the remaining hair pointed in spikes. Many wore body jewelry that glinted like jewels and had tattoos, swirls and symbols that were beyond Roland’s knowledge. And so many had horns placed on faces or down backs, along wings, and even at joints such as the elbows or knees.

His heart bashed against his ribs, and he panted in fear and fascination. So close. They were so close. If he survived this, he’d have plenty of visuals to create accurate portraits. Even as the thought crossed his mind, he cringed. They were fighting for their lives, and there he was, selfishly thinking of his artistic endeavors. And not only were they being attacked, but Emphoria was also under siege. That was not coincidental. There was a guiding hand coordinating the demons.

The angels held their ground admirably, even being far outnumbered. The clang of blades, the smack of flesh against flesh, and the cries of the injured surrounded him, grating against his ears, thundering against his bones. Anpiel stayed in the circle, occasionally slashing through any opening, the steel of her blade cutting deep despite the thickness of demon hide.

Demons swarmed above them, and it was all the soldiers could do to keep them at bay. But what did they hope to accomplish? They were only delaying the inevitable.

“Demons should not be this high,” Anpiel said, as if to herself. She panted through her teeth, eyes blazing with fear and anger. “How did they move past our guards who watch over the Lower Realm?”

Those guards could be dead. Or were they being attacked as well? Like the gates and like them? Just how many demons were participating?

Roland looked above as the demons moved closer, blocking out the sun’s light. Cast into shadow, Roland knew the soldiers would break, and then the heir to the high chancellor’s seat would be gutted. At that moment the only thing that mattered was Anpiel’s life. Without her their world would fall into chaos. With no heir, order would be broken.

Roland looked below their feet. Their toes touched the thick gray clouds that grew darker as if a storm was coming. He looked around and up and realized more demons were joining the fray. If they were to escape, now was the time.

Fear wanted to burst his heart, but as he latched on to the absolute truth that Anpiel had to survive, the focus deadened much of it. He gripped Anpiel’s wrist and tugged her close.

She wanted to argue, he could see that. She didn’t want to leave her soldiers. But the cold, hard fact was her life meant more than theirs. She snarled and changed the grip, lacing steely fingers around his wrist instead. Then she yanked him with her, and they plunged through the clouds, leaving the screams and clangs of battle behind.

A storm was indeed brewing, and the rain soaked their robes, the silky fabric clinging to their bodies. With hair plastered against his face, Roland could barely see, the freezing droplets burning his eyes. His feathers didn’t enjoy the harshness either, but he pushed forward. Not that he really had a choice, considering Anpiel’s biting grip.

Stiffened with cold and soaked to the bone, they finally burst from under the cloud, jerking to a halt. The Middle Realm, a place wild and unclaimed, spread out underneath them. Roland had seen it before; he’d even painted its likeness in his younger years. It was radiant, the blues and greens vibrant and alive, warm and soft. Starkly different from the hard, cold, and unyielding Upper Realm of the angels. But the beauty before them wasn’t the reason they stopped so suddenly.

Anpiel’s breath caught, and she held forth her sword. Roland only stared, mouth and throat drying in an instant. His gut pitched in utter terror. A void seemed to seep up from the Lower Realm, the thick darkness swallowing the Middle Realm from sight, steadily making its way up. Up.

Thunder cracked inside the black, and lightning flashed red and blue, bright enough to blind.

The darkness was alive.

And it was coming for them.

Anpiel recovered first and nearly yanked his arm out of its socket as she bolted in the direction of Emphoria, staying near the bottom of the clouds.

“Just a little ways more,” she said, gasping for air. “Then we go up through the clouds again.”

“What is that?” he said, croaking the words.

“What is that?” he screamed.

She flashed him a fierce look out of dark eyes and didn’t answer. She merely flew faster, and he could barely keep up.

“Where do you hope to fly to, little angels?”

Roland nearly fell from the sky. That voice. Was. Enormous. It rumbled against his bones, rattled his teeth. It seemed to come from all around them, the source unseen. Even Anpiel faltered for a moment. Then she gritted her teeth and continued to fly, though exhaustion slowed her and the strain on her face was visible.

It also disturbed him that the speaker was using Middle Enochian, the most common angelic dialect in use. The voice clearly did not belong to an angel, so what was it?

“There is nowhere you can fly that I won’t find you.” The voice sounded… amused. Arrogantly amused, like an owner watching a favorite pet doing something silly. The condescension momentarily managed to bump Roland’s fear to the side.

Who was this ass?

As if answering his unspoken question, a giant mass emerged from the darkness below, solidifying into a…. Oh Light.

I hope to eventually write two sequels after “On Wings of Thunder” to continue Asagoroth and Trystan’s story. Perhaps in a year or two.

Right now I am working on three series concurrently plus a handful of stand-alones. I have way too many stories buzzing around in my brain.

Thank you for joining me and I hope you’ll check out my story! M.D. Grimm has wanted to write stories since second grade (kind of young to make life decisions, but whatever) and nothing has changed since then (well, plenty of things actually, but not that!). Thankfully, she has indulgent parents who let her dream, but also made sure she understood she’d need a steady job to pay the bills (they never let her forget it!). After graduating from the University of Oregon and majoring in English, (let’s be honest: useless degree, what else was she going to do with it?) she started on her writing career and couldn’t be happier. Working by day and writing by night (or any spare time she can carve out), she enjoys embarking on romantic quests and daring adventures (living vicariously, you could say) and creating characters that always triumph against the villain, (or else what’s the point?) finding their soul mate in the process.