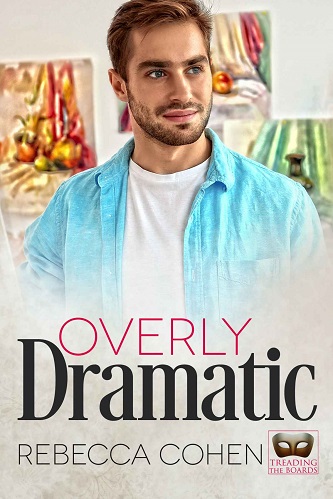 Blurb:Andy Marshall has moved back to London with plans for a fresh start. A little heart sore from a nasty break up, he joins a local amateur dramatics society called the Sarky Players based in Greenwich. Despite his best efforts at the audition, Andy lands a leading role in play called Whoops, Vicar, There Goes My Trousers, a ridiculous farce written by a local first-time playwright.

The play might be bad, but the Sarky Players are a friendly bunch. Andy quickly makes new friends and finds himself drawn to Phil Cormack, a local artist helping with the set and props. But despite their growing attraction, Phil’s not in the right place to date, and Andy won’t wait forever.

Life doesn’t run to a script, and if Andy and Phil want to get their happy ending, they need to move past rehearsals and put each other centre stage.

Review: This is a bit of a fun novella which was thoroughly enjoyable and good when you just want to read and relax. ‘

It’s a bit of a usual story – main character moves town/city to get away from a bad relationship and a fresh start. Andy has done exactly that after a long-term relationship breaks down and takes up a job in London where he works as an accountant. After talking to one of his co-workers he winds up joining a small amateur theatre group called the Sarky Players.

This is a funny story, helped particularly by the fact that Andy finds himself cast in the horrendously named Whoops, Vicar, There Goes My Trousers. It’s especially funny when Andy encounters the play right and her reaction that the play she wrote as a bet was being put on by the local am-dram company. It’s through the Sarky Players that he meets one of the props managers, Phil, and instantly there are sparks between the guys. Sometimes it felt like the romance was a bit slow in coming along but I love the chemistry between Andy and Phil, nonetheless.

I liked the very human and relatable feel of the other characters in the Sarky Players, including the woman and her husband that had introduced Andy back into the world of theatre. It’s a lot of fun and nothing to take more seriously than the words on the page.