Hi guys, we have Rick R. Reed popping in today with his new re-release Sky Full of Mysteries, we have a great excerpt and a brilliant $10 NineStar GC giveaway so check out the post and enter the giveaway! ❤️ ~Pixie~ 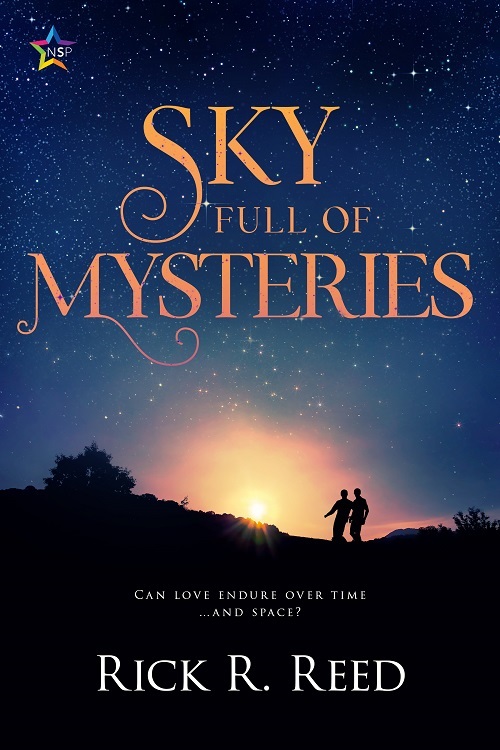 What if your first love was abducted and presumed dead—but returned twenty years later?

After they made love, they were polar opposites in how they reacted.

Cole, barely minutes after coming, would be asleep, mouth open and snoring, body lax. A baby who’d just been fed. Rory looked down on him as he sat perched with his back against the headboard. Despite—or maybe because of—the spittle that ran out of one side of Cole’s mouth, he felt a shock of warmth go through him as he gazed at Cole, wondering how he’d gotten so lucky. Although Rory was a few years younger, he was a nerd with glasses. He wasn’t bad-looking; he just wasn’t all that noticeable in a crowd. How had he snared a guy like Cole, with his perfect runner’s build, his dark brown wavy hair, and the perpetual five-o’clock shadow that accentuated, rather than hid, the angular planes of his face and his sharp jawline. Rory snickered in the darkness at Cole as a snore erupted from him, almost loud enough to shake the glass in their bedroom window.

It was always like this—maniac in the sack until he came, and then it was lights-out for Cole, as though he’d been drugged.

Rory, on the other hand, always felt energized, pumped up, alive, as if he should hop from the bed, go outside, and run a mile or three. Or make a meal. Or write the great American novel. Or catalog his collection of books alphabetically, and then by genre.

Tonight was no different. They’d just moved into the one-bedroom apartment in Chicago’s Rogers Park neighborhood. The neighborhood, the Windy City’s farthest east and north before heading into suburbia, afforded them a chance to live by Lake Michigan without the higher rents they’d encounter closer to downtown.

They were young and in love, and cohabitating was a first for both of them. Rory felt they were already having their happy-ever-after moment.

The apartment was a find—a vintage courtyard building east of Sheridan Road on Fargo Avenue. Their unit’s bedroom faced Lake Michigan, which was only a few steps away from their front door. A lake view, high ceilings, crown molding, formal dining room with a built-in hutch, huge living room with working fireplace, and an original bathroom with an enormous claw-foot tub were just a few of the amenities they were delighted to find—all for the “steal” monthly rent of only five hundred dollars.

The apartment, which would eventually be filled to bursting with a hodgepodge of furniture and belongings, ranging from family antiques supplied by Cole to Lost in Space action figures from Rory, was now a scene of chaos with moving boxes everywhere, almost none of them unpacked.

They’d spent the whole day moving and were exhausted when they were finished. Even though it was August, by the time they were done dragging the boxes out of their U-Haul truck, through their building’s courtyard, and then up to the tenth floor via the rickety but thank-heaven-reliable elevator, the skies above the lake had gone dark. They ordered stuffed spinach pizza from Giordano’s, just south of them on Sheridan, and feasted on it, melted mozzarella on their chins, on a couple of beach towels they found at the top of one of the boxes.

And of course, Rory being twenty-three and Cole twenty-six, with their blossoming love all of six months old, they did find the time and the energy to make love, once on the beach towels and once in their bed. Rory knew there’d be more of the same come morning’s first light.

But getting back to postcoital bliss, Rory now found himself feeling restless as he lay beside the snoring Cole. The moon was nearly full and they’d yet to put up blinds, so it shined in the bedroom window, casting the room in a kind of silvery opalescence. Rory thought the boxes and the furniture—Cole’s oak sleigh bed and Rory’s pair of maple tallboy dressers, plus an overstuffed chair they’d found in an alley just before moving—all had a kind of grayish aspect to them, almost unreal, as if he were observing his own bedroom as a scene from a black-and-white movie. Maybe something noir…with Barbara Stanwyck and Fred MacMurray. Rory smiled and turned away from Cole. Just a half hour or so earlier, with the overhead light fixture shining down on them, Rory thought the movie would have been a porno, with himself cast as the insatiable bottom.

He chuckled to himself.

He tried to relax, doing an old exercise he’d learned from his mom. Starting with his feet, he’d wiggle, tense, and then allow that body part to go slack to relax. He worked his way up his whole body, wiggling, tensing, and relaxing as he went, until he reached his head.

Behind him, though, as if he had eyes in the back of his head, he noticed something odd.

It was like there was suddenly a waxing and waning of light.

Rory turned and looked toward the uncovered window. He couldn’t quite see the moon, but it seemed like it was brightening and darkening, brightening, then darkening…

But the whole of this August day, it had been clear, with nary a cloud in the sky. Rory wondered if a cloud bank had moved in, obscuring the moon and then revealing it as the wind pushed it away. He could see this in his mind’s eye but couldn’t quite believe it.