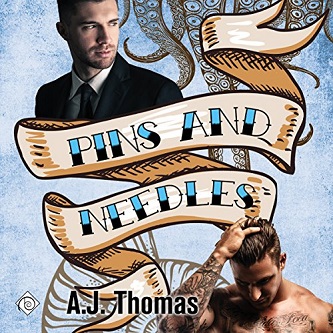 Blurb: The truth is rarely seen on the surface, and getting to it might mean digging deep….

After a devastating accident and a long stay in the hospital, the last thing petroleum engineer Sean Wilkinson wants to deal with is the settlement the oil company tries to force on him. He’ll never be able to work in his field again, his education is all but useless, and his surgeons are pessimistic about whether he’ll ever walk again. He needs someone in his corner, but most law-yers take one look at his tattoo-covered father and turn their backs. It’s just Sean’s luck that the one attorney willing to give him a chance is also the hottest guy he’s ever seen.

As a trial lawyer, Nate Delany has a lot to prove – to his father, the world, and himself. Sean in-trigues Nate, and he struggles to reconcile the gifted tattoo artist he can’t stop fantasizing about with the quiet, brilliant engineer. His investigation reveals facts left out of the accident report – including an illicit affair, greedy coworkers, and a vicious corporation that will do anything to pro-tect its bottom line. When Sean’s life is threatened, winning Sean’s case, and his heart, be-comes a lot more dangerous.

Review: Pins and Needles is a standalone novel by AJ Thomas. I’m not really all that familiar with Thomas’s writing, although I think I might have read some books but I know I don’t have anything by the author in my Audible library. The narration for the audio was performed by Jason Riley, a completely new narrator for me. Therefore, it’s safe to say I went into this book not knowing what to expect from both the story and the narration and only knowing that I liked the look of the blurb.

The narration was great. I will definitely be interested in any more books which are narrated by Jason Riley. His voice and tonal differences between the MCs suited the characters well. Overall, a pretty awesome performance and by the end of it I would go as far as to call it a flawless performance too.

The story centres around Sean Wilkinson and Nate Delaney. Sean has had a tough upbringing, but he was lucky that there was someone there to support him (not just financially) as a kid, through college and now to the third day on his job shortly after graduation. Coming from an unconventional background (his stepdad runs a tattoo parlour), Sean is super smart and has become a petroleum engineer, so smart that during his internship he invented a machine to use on the oil platforms. However, on the third on the job, there was an accident that ended in his losing his leg. This is the start of a lot of legal and medical issues which Sean has to navigate, with the help of his kind, tough teddy-bear like stepfather. And that is how Nate Delaney comes into his life.

Nate has worked his butt off to become a lawyer, like his father, and after college and passing the bar has been working for his father’s law firm. He loves being a lawyer but he doesn’t love his job. He is treated a lot tougher than any other intern or lawyer at his level because his father is adamant that there will be no special treatment. Which is understandable, however, it has been taken too far and his father does not see the hours of thankless tasks he does, proving him more than competent. Sean doesn’t want to be his father or his father’s firm, and is ready to make it on his own. Circumstance leads him to Sean’s stepfather and then to Sean.

While there is an instant attraction between Sean and Nate there is also a lot of trouble. Nate is trying to make it on his own, while his father’s firm could ruin his reputation after leaving so sensationally. Not to mention the conflict of interest issue brewing as he gets closer to Sean and starts to fall in love. Sean has gone through a major trauma, has a tonne of personal baggage connected to his old job, and he needs to heal both mentally and physically. The loss of his leg has changed his life, but his drawing and gift when it comes to tattoos is something that helps him through the tough times.

Things aren’t simple with Sean’s accident. When Nate begins to dig, he finds a lot more happening that what appears on the surface. At first he wants to ensure that Sean gets enough money to pay for medical bills as well as to keep Sean afloat with his chosen career now lost to him. This aspect of the plot is an adventure with twists and turns. Nate’s astute observations brings the story forward, while Sean’s fears throw in the occasional roadblock. But together this gives us an interesting and engaging plot.

Pins and Needles is one of those awesome discoveries, where I was so happy that I took the chance when I read the blurb and decided to get the audio book version. Firstly, I instantly connected to the characters thanks to a very relaxed writing style that made the emotions of the characters accessible to me as the reader. I also felt the chemistry between the characters, which was woven well into the greater plot, which involves some intrigue, mystery and danger. It also helps that there is a lot of depth to these characters and they change so much throughout the book as individuals and it’s a development that goes hand in hand with the developing relationship.

I recommend this for anyone that likes a bit of a mystery, characters who are more than meets the eye and sprinkling of danger.