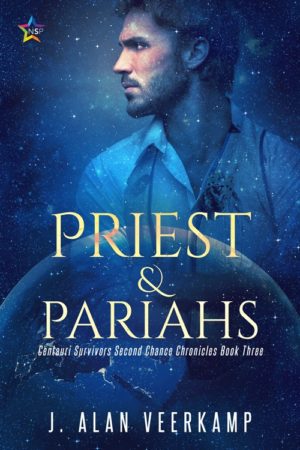 Blurb: Costa McQuillen has escaped from Earth, where being para-human—a Pariah—with tech empathic abilities is illegal, and marks him for extermination. Arrogant and standoffish, Costa is unable to trust anyone but is willing to risk everyone’s safety in his desperate effort to reach the planet Omoikane. His best solution, gaining passage on board the Santa Claus.

Arbor Kittering is the crew’s newest coding tech. Having spent a short time in prison for data hacking and falsifying government files, the Santa Claus is his last chance at a new start—if he can decipher the strange malfunctions plaguing the ship.

Eugene “Priest” Jones, the Santa Claus’s Head Pilot, is a bit of a scoundrel. Perpetually single, Priest is attracted to Costa and Arbor. In truth, he’d like to have both, but it’s clear even his grifting and gambling skills can’t make that happen.

Now as they all travel together, it appears Priest needs to make a choice before it’s too late as each of their lives intertwine with potentially dangerous and deadly consequences.

Review: This story was so good. Priest is his usual self when two new new people enter the ship. Arbor is a dwarf with some issues about his height and past as Priest soon learns upon first meeting the man. He is hired as part of the tech crew to help Mac.

Casto is on the run after having escaped the persecution of para-humans on earth. You don’t know completely about Casto’s past right away but it heartbreaking. He’s on a mission to save his brother but is a powerful man with an addiction to calm. Calm is a drug to suppress his abilities.

I loved this exciting yet powerful story about three men who each have issues, two need help with their issues, one needs help completing his mission to set his brother free. I don’t want to give away too much but it’s edge of your seat worthy with hot scenes and action that had me in awe.

The story flowed smoothly and I am looking forward to meeting more of the crew and seeing what happens with Poll. Fantastic addition to the series.