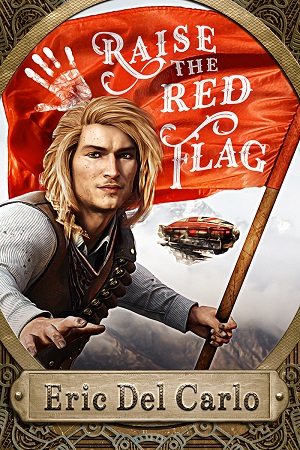 Blurb: In an 1867 that never was, the American colonies are finally gearing up to revolt against oppressive British rule enforced by advanced technology. British airship captain Hamilton Arkwright is captured by the rebels when his vessel is commandeered. The insurgents are also aided—reluctantly—by young Jonny Callahan, a thief and ne’er-do-well who would rather carouse on the streets of New Orleans than fight for independence. When the two seemingly opposite men are thrown together on a harrowing journey across the war-torn colonies, they must grudgingly rely on each other for survival. Despite their efforts to resist, the attraction between them threatens to throw a wrench in their plans to remain enemies.

They battle their way through American guerillas and a demolition-derby-type highway to reach the decimated streets of Chicago, where British forces are preparing to commit a war crime of enormous magnitude. Though affection has grown between them during their mission, they are still on conflicting sides, and they may have to choose between loyalty to their causes and their love.

Review: An interesting turn for the time period. Hamilton and Johnny are engaging characters with a love interest. But things are from easy for the two. There is a mystery of sorts, a plan to capture Captain Hamilton that has Johnny in it’s midst.

Though I did like the story I found some things difficult to understand. Aside from that the plot was different yet intriguing for this time period. I loved reading about the colonies revolt, how they went about things in this alternate view.

Amazing details about the history and each character throughout. The science fiction element was a nice touch that added to the story rather than detract from it. All in all it was a good read with a great cast of characters that added depth to the story.