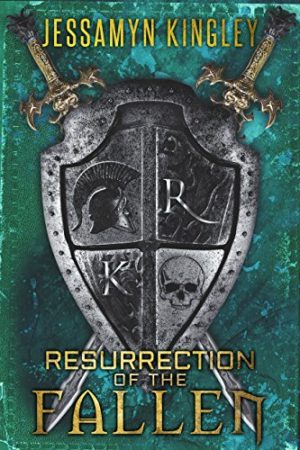 Title: Resurrection Of The Fallen

Blurb: Reverent Knight Drystan Kempe has no use for the rumors that have swirled around him for the past two centuries. There is no way he could be the former emperor of the dragons. All they share is a common name. After all, Emperor Drystan had a love that has become legendary since his death and the fallen knight Drystan is very much alone. As a man over six hundred years old, he’s waited impatiently for the other half of his soul. When he finally finds him, he is unamused to find him bearing the name of the former emperor’s mate.

Reverent Knight Conley Gylde is confident that whoever he was before his resurrection it has no bearing on this new beginning. When the pair finally become blood-bonded, they get a great deal more than they could have ever bargained for.

Review: The first 138 pages are about Coneley and Drystan’s meeting when they were younger, 17 and 19, and subsequent mating to the day they died. This part ends with the men as emperors and their death. I liked the details but felt it was drawn out too much as I kept thinking will we ever to get to the reason why the book is named what it is.

The next part begins after Latarian is killed, good riddance I say. I liked the look through Drystan and Conley lives. I felt that Drystan was too hard on Chand when his and Conley’s memories returned.

These two men were bigger than life before they were killed then resurrected. I found myself in awe of all they accomplished in their time period. I was devastated when their lives were taken by greedy Dukes.

I really like this series but still wish there were more action scenes in them.