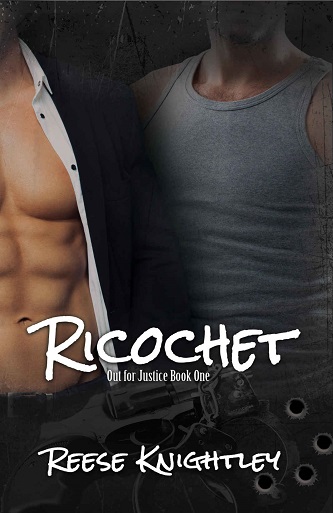 Series: Out for Justice 01

Blurb: WITSEC victim Noah Bradford knows secrets that could get him killed, and staying hidden seems like a good plan. What he didn’t plan on is losing his heart to a man who is sworn to protect him.

Battle scarred US Marshal Robert “Mac” Mackenzie has a job to do, and guaranteeing the safety of Noah Bradford is at the top of that list. Mac will do whatever it takes to keep Noah safe, even if it means walking away.

Mac and Noah, brought together during extreme circumstances, have been separated by evil. It’s been six years, give or take, and Noah is coming for vengeance against the men who killed his mother. He’s on a collision course with Mac, who has no idea of the man Noah has become. Sparks fly and the heat sizzles when these two powerful men are reunited, but will they survive the passion the past created?

Noah had the best mom and the worst life ever. He watched his mother being murdered by his step-father. He spent most of his life in a secret hell. His step-father was evil but the man he worked for was even worse. He was seventeen when he was taken away from that hell but it didn’t mean it would end. He was falling for the one man protecting him and hiding from the two men that wanted him dead.

Mac was to go end and catch those that the US Marshal’s wanted. They had finally found out where Stevenson and Manning were. They were to go in arrest them and save those who were innocent. He had not expected to find a teenager who just so happened to be Stevenson’s stepson. He knew he was going to loose his heart to this and had to put a stop to it.

Several years go by and damn if Noah had changed so much. He was the ghost who protected the innocent and killed the guilty. But the two evil from his past were showing up once more.

I liked how it started but the jumping around from time periods was a bit off to me. Also was the fact that the story jumped from one part to another without really giving you time to adjust. However it didn’t really bother me to much. I liked all of the characters quite a bit and wasn’t to surprised by who Noah’s real father was. It was an easy guess even though it is truly mentioned. This story was very action pack and danger filled. It did have some hot sexy times though.

I enjoyed reading this and can guarantee that it will be read many times over. In fact I sit down and read this story all in one sitting. It was that entertaining. I would definitely put this on my favorite shelf.

This was an amazing story about Noah and Mac. I loved how their relationship was not instant and they meet up years later. There is a lot of sexual tension between the two at the beginning but given Noah’s age nothing happens until much later.

I was proud of Noah for making something of his life after all he had been through. Being one of the deadliest in a top secret organization was a plus for him in that he could protect himself when the two men that got away come after him.

Mac was fierce in his own right and as such the two made a great couple and worked well together. This story is action packed with lots of gunfights and taking perps down. I loved all the agencies working together and Noah’s team mates were just as deadly as him. I am looking forward to the rest of the series and getting more about the characters throughout this story.