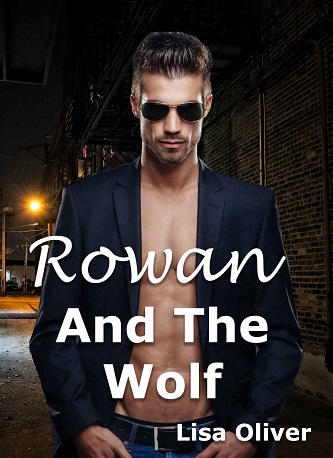 Title: Rowan and the Wolf

Blurb: Rowan’s life had gone down the toilet ever since his teenage crush had moved away when he was fourteen. Shifting as omega, then his parent’s dying, Rowan knew the only luck he ever had was bad luck. If it wasn’t for his grandmother, he’d have left his pack lands a long time ago. Visiting his Grandmother one night, taking her the baking supplies she used to feed the children of the pack, he was confronted by his worst nightmare – Percy. But to his surprise, the evening didn’t turn out the way Percy and his friends had planned.

Shadow, formerly known as Gray, always knew he’d return to his home pack one day. He just didn’t expect it to take so long. When he comes across his brother Percy, threatening the one he’d always known was his mate, Percy’s night went from bad to worse. Killing Percy was easy for Shadow; wooing his mate was a whole different story.

Between the drugs, the elders, and the fearful pack members, finding time to make Rowan happy was an almost impossible task. But Shadow hadn’t come home alone. If he can find the one man behind all the mess, then he and Rowan’s life would be the HEA he’d dreamed of. That’s provided Rowan doesn’t get killed first.

Review: Shadow left his pack and joined the military to give his young mate some time to grow into an adult. He had seen the nasty side of life and just wanted to grab his mate. However what he came home to was pure chaos. His mate was getting attacked by his asshat of a brother, drug deals were going down, homes were needed to be repaired and so much more.

Rowan had a crush on an alpha wolf when he was fourteen but then that same wolf took off. His parents had been killed, he walked with a permanent limp, his grandmother was trying to keep the young in the pack fed and he was getting hurt every time he turned around. Then in comes his hunk he dreamed of who just happened to be his mate.

I had read a few of the reviews so I was wondering what was so good about this book. And let me tell you that wow, it was far more than what they talked about. I had hoped that this was a series because Talon and the others need to find their mates. I loved Rowan and his strength, and lets just say that his grandmother is a grandmother to be proud of. Shadow was a nice surprise for me. He had not come back to the pack to stay but to grab his mate. Then after seeing what was happening he took the jump.

It is an action packed love story that kept me on the edge of my seat. I can honestly say that this is the story that will be read many times over. Now for the bad news, everything was taken care of to quickly for me. You see some of the action and hear about the rest. However when it got down to some of the fight, there was a bit left out.

Other than my issues with the story it was an amazing story that I would definitely recommend.