Hi guys, we have A.M. Arthur popping in today with her new release Saved, we have a great excerpt and a brilliant giveaway so check out the post and enter the giveaway! <3 ~Pixie~ 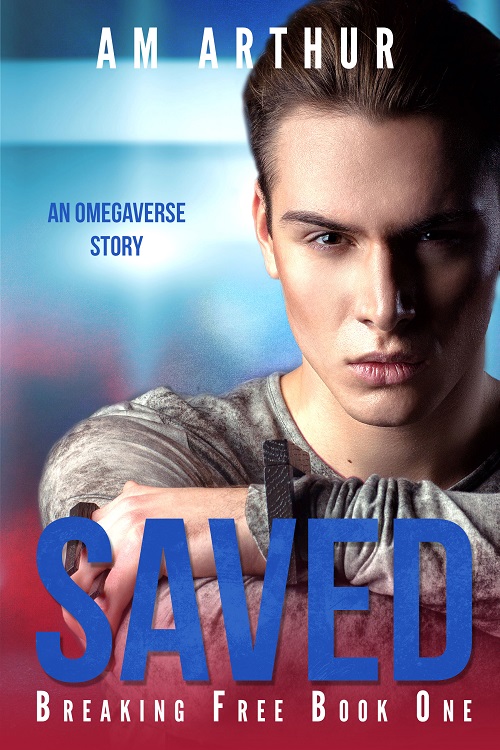 He didn’t want an alpha to save him, but fate had other ideas…

Braun Etting was raised to know his place as an omega by his alpha father’s cruel words and fast fists, and he expects nothing but violence from the alpha who may one day mate him. His older brother Kell mated a cruel alpha who abuses him daily, and Braun is terrified of that seemingly inevitable future. When Braun’s father dies in a car crash, leaving Braun an orphan, he’s sent to a halfway house for omegas. But on his fourth night there, he witnesses a horrifying crime that sends him fleeing to the streets alone—and edging into his first heat.

Tarek Bloom is settled in his workaholic, single lifestyle, even if it is somewhat embarrassing to be a twenty-eight year-old unmated alpha. He enjoys his job as a constable, helping people and solving problems, so he isn’t prepared for his life to flip upside-down when he walks into his beta friend Dex’s apartment to help with “a problem.”

The problem turns out to be an unmated, nearly in-heat omega orphan who Dex and his husband rescued off the street last night. The even bigger problem is that Tarek feels the mating bond for this terrified omega immediately—and he’s pretty sure the omega feels it, too. But Braun hates alphas as a general rule, and no way is he giving in to the bond. All mating leads to is violence and suffering, so no thank you. But Tarek’s gentle kindness slips under Braun’s emotional shields, and Braun begins to want. To dream. All Braun has ever known is violent alphas, but Tarek is determined to make Braun trust him—and to trust in the idea of their happily ever after.

NOTE: This is a non-shifter Omegaverse story with alpha/omega/beta dynamics, heats, knotting, and mpreg. In this world, omegas are second-class citizens with few civil rights and almost no protections under the law. Trigger warnings for physical, emotional, and sexual abuse. 67,000 words. “Would you be able to describe exactly what you saw that night in detail?” Tarek pulled a notepad and pen out of his front pocket.

Braun’s entire body went rigid. “Why? Who are you really?”

“I really am Tarek Bloom.” For a moment, he actually seemed contrite. “What I didn’t tell you is that I’m also a constable.”

“Shit.” Braun bolted out of his chair and toward the front door, fork still in his hand.

In a flurry of movement, Tarek was in front of him, blocking his path to the door, and Braun lashed out with the fork. Dex grabbed his wrist and plucked the fork out of his hand, but that didn’t stop Braun from swinging. He punched Tarek in the chest. Twice. Panic settled in, overriding his common sense, and he tried to push past the brick wall of a man.

Arms wrapped around his torso from behind, pinning his arms to his sides. Serge’s comforting scent settled his racing mind a bit, but it was Tarek’s hand on the back of his neck that settled Braun completely.

“Calm down, firecracker,” Tarek said. His deep voice soothed Braun’s frazzled nerves, and his touch sent his pulse racing with delight. “You’re still safe, I promise. No one here wants to hurt you.”

“Why do you care?” Braun snarled. “I’m just some useless omega you’ve known for twenty minutes.”

“You’re far from useless, little one.”

Tarek’s other hand rose, nearing Braun’s face. Braun snapped at his fingers. “I’m only a womb to you.”

“Far from it, my firecracker.” The hand on his neck squeezed. “Far from it.”

The grounding touch made Braun want to roll over and show his belly, but he was done being passed around. Done letting other people control his life. He didn’t want to feel this mating bond to Tarek, but he also couldn’t turn it off. Even with the heat block, Tarek was under his skin, doing funny things to his insides.

Angry and confused, Braun dared look an alpha in the eye. A.M. Arthur was born and raised in the same kind of small town that she likes to write about, a stone’s throw from both beach resorts and generational farmland.  She’s been creating stories in her head since she was a child and scribbling them down nearly as long, in a losing battle to make the fictional voices stop.  She credits an early fascination with male friendships (bromance hadn’t been coined yet back then) with her later discovery of and subsequent love affair with m/m romance stories.

When not exorcising the voices in her head, she toils away in a retail job that tests her patience and gives her lots of story fodder.  She can also be found in her kitchen, pretending she’s an amateur chef and trying to not poison herself or others with her cuisine experiments.

Contact her at am_arthur@yahoo.com with your cooking tips (or book comments). Win an Ebook copy of SAVED and an ARC of Breaking Free #2, SEEN.!