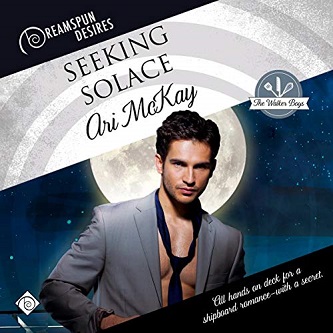 Blurb: All hands on deck for a shipboard romance—with a secret.

Like his cousins, Devin Walker aspires to be a chef, but he wants to indulge his wanderlust while feeding his customers, and working a cruise ship seems like the solution. Since he can’t find an opening in the kitchen, he’s happy to start out in a position behind the bar.

While onboard Poseidon’s Pearl, Devin is assigned to shepherd a visiting executive. Paul Bailey is quiet and unassuming, and a car accident that cost him his leg also shattered his confidence. He doesn’t think he’s attractive to other men anymore, and Devin is eager to show him just how wrong he is. Paul has a surprising secret that might sink their passionate affair before it even leaves port.

Review: Seeking Solace is the third book in Ari McKay’s series The Walker Boys. It isn’t essential that you read the previous books, though it would probably make life easier when one of the MCs, Devin Walker, talks about his family back home in Buffalo Lick, Texas. Much like the previous two books, Seeking Solace is a sweet and simple romance at heart. Of course, there is a good dose of drama, mostly fuelled by miscommunication and running away from one’s problems, but it is a fun and adorable story.

I really enjoyed this story when I read it and looked forward to the audio. When I grabbed the audio from Audible, I was even more excited to see that the narration of this book was done by John Solo. I absolutely love Solo’s narration, he has the magic touch – the magic tonsils? – when it comes to bringing emotional depth into the characters with just the tone of his voice. Some of Solo’s performances are also so good that a book that I didn’t like when I read it, or pick it up to read after listening to audio, are far more enjoyable than just reading the written text. That is the sign of a good narrator, in my opinion. Seeking Solace is no exception in terms of performance, I loved it and connected to Devin and Paul so quickly, especially when the drama of the story comes into play.

The story is about Devin Walker, one of the famous Walker boys from Buffalo Lick, Texas. Unlike his many cousins, he had it a little tougher time growing up when people out of town hurled racial abuse at him. Like many others in Walker clan, he has the cooking bug. He wants to be a chef but before he can get there, Devin is working as a bar tender on a cruise ship, where he meets Paul Bailey.

However, Paul Bailey is Paul Mercer. He is on the cruise ship undercover, as he is in fact the heir of the cruise line company. He just wants to be seen as another exec who has to spend time on ship before settling into a job at head office. Devin becomes Paul’s staff liaison and the two quickly develop a friendship that becomes something a lot more meaningful.

The problem being, is that when Devin discovers Paul’s true surname, he feels betrayed and goes back to the only place he knows to recover. Paul is confused why he didn’t see Devin and again and when he discovers what has happened he is determined and sweet enough to take the biggest risk.

These guys are well suited. Their chemistry is strong but there is something deeper to it than their physical attraction, which does bring in something of an instalove aspect to the book. This is the perfect escape book for a relatable and relatively uncomplicated romance. Fans of the previous books in the series or fans of Ari McKay or people that simply love the romance and sappiness that comes from many Dreamspun Desire books, you won’t be disappointed. For anyone else, if you’re into simple and sweet romances then this is the book for you.