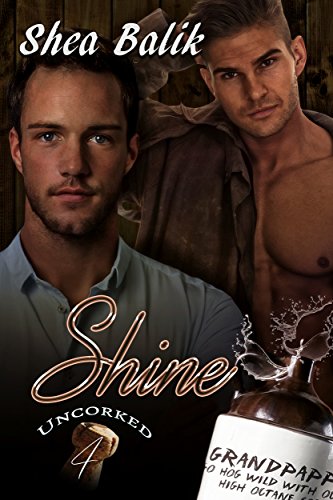 Shine was over people thinking because he had a southern accent, and made moonshine, that he was a hillbilly redneck with no education. Sure, he occasionally liked to fuck with them and spout out his grandpappy’s sayings, like every dog should have a few fleas, but that didn’t make him dumber than a box of rocks. So, when he met a man who made his heart race and his mouth go dry with the thought of licking every inch of his body, then instantly put him down because he was making moonshine instead of wine, Shine dared him to try and drink with the big boys.

Montague knew better than to take the challenge to drink the moonshine Shine was offering, but he refused to be insulted by some hick from this small, backwater town. The fire that ignited in his stomach and burned a path up his throat, making him want to cry for his mommy, told him just how stupid he could be. Fucking pride. If Shine didn’t get that smirk off his face at Montague’s reaction to the battery acid he called alcohol, Montague was going to punch him in the mouth. Or kiss him. It was a tough call to make.

There is a fine line between love and hate, especially when alcohol is involved. Then again, it might take a little liquid courage to drop their defenses enough to discover their passion for each other.

Review: Each book in the Uncorked collection features a different romantic couple. To enjoy the overall story arc and crossover characters, I would recommend reading the series in sequential order.

To me there is nothing better than a good romance between two sexy men. If those me just so happen to throw sparks off and have some humor going on, then the better. I came across this author some time ago and knew she was going to be one that I would follow. Her stories always have just a bit of conflict in them, lots of humor, hot sex and some good old fashion loving.

When people find out that Shine talks with a southern accent and deals with moonshine, they tend to throw him to the curb and call him a redneck hillbilly with no brains. That is what happens when he comes across Montague. The truth is, Shine is probably one of the smartest men around.

Montague has never really had a job, just a few part-time ones here and there. He has a job now as tour guide, but the creep he works for is asking for a bit more then our sexy man is willing to give. Now the first time Montague and Shine meet, it doesn’t go down so well. But he might be the only one willing to give Montague a full time job and help.

Sparks fly and so do the clothes when these two finally get it together. You mix that in with some powerful alcohol and we will see what happens with these two. Great story with likable characters. I always did get a kick out of this series, and definitely can’t wait to get my hands on the next one. But I will leave the drinking to those who can handle the crazy alcohol that Shine makes.