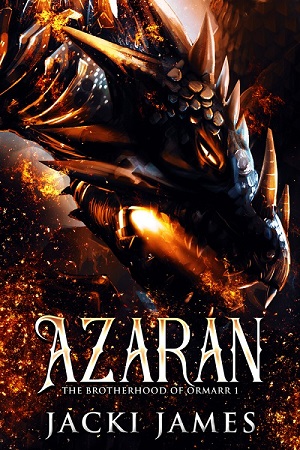 Series: The Brotherhood of Ormarr 01

I was born a dragon rider. A member of the Brotherhood of Ormarr, son of Cadmar, and the eldest of four sons. I was raised to defend the innocent and protect the secret of the dragons, but when I was eighteen, my parents were brutally murdered and the training and care of my brothers fell to me. My entire adult life has been spent helping my brothers grow into the strong, brave dragon riders they were born to be. Now that the youngest of my brothers is close to adulthood, the last thing I need is someone else to worry about—someone else to be responsible for. If only the handsome doctor fate had chosen for my mate wasn’t so perfect for me.

All I ever wanted was to help people, that’s why I became a doctor, but I quickly learned that modern medicine was more about the all-mighty dollar and less about saving lives. It wasn’t long before I was doubting my life choices. A vacation to the ocean was supposed to leave me refreshed and ready to get back to work, but instead, I found myself pulled into a world I never knew existed. A world where dragons are real, men fight like medieval warriors, and my soulmate has his very own bat cave. Azaran thinks the last thing he needs is a mate to worry about. Good thing I don’t need anyone to take care of me. My sexy dragon rider, on the other hand, needs someone to take care of him, and I think I’m just the man to do it.

Azaran is the first book in The Brotherhood of Ormarr series. While each book focuses on a different couple, the overall story arc continues in the next installment. For maximum enjoyment, we suggest reading in order. Azaran is a m/m romance, and is recommended for adults 18 years and older.

Review: Azaran raised his three brothers after the death of their parents, for ten years he’s been responsible for their education, training and welfare and teaching them to be the best dragon riders in the world. With his youngest brother just a year short of adulthood Azaran comes face to face with his mate, a mate he doesn’t want because another responsibility is the last thing he wants and he’s tired of having no choices.

Toby is a doctor who is sick and tired of having his hands tied by insurance companies, heading off for a two week holiday sounds amazing but what he discovers is the most amazing thing in the world. Meeting Azaran is a shock and finding out the truth about Azaran’s actions has Toby making life changing decisions, now he just needs to convince Azaran that he can take care of himself.

This is a great story that has an interesting background and intriguing characters.

Azaran had a lot thrown on his shoulders at the tender age of eighteen and that has hardened him to fate dictating his life. He isn’t happy at all to have found his mate in Toby; he’s resentful in fact and avoids Toby at all costs. It takes being taken to task by his younger brother for him to step up, and when he does the flames erupt.

Toby is very open to what he discovers and embraces his new future, while his relationship with Azaran is rocky at first Toby accepts that Azaran has had a lot of responsibilities that have worn him down but he’s confident that he can make Azaran his.

I enjoyed this story but I’ll be honest and say that there could have been more of the overall arc rather than just a hint of it because it seems like a very interesting story arc. In this story it’s more like an introduction of characters and history with a hint of where it’s going in the future. I mean don’t get me wrong I really did enjoy the story of Azaran and Toby and seeing how they made their relationship work, I liked seeing how their team worked as well but I think I was just expecting it to be a bit more, well, meatier.

The story is well written and the history of the dragons is very interesting, the sexy times between Azaran and Toby are fan yourself hot and their relationship is just a touch rocky (well once Azaran pull’s his head out of his arse). The interaction between the brothers is heart-warming and I can’t wait to read their stories.

I recommend this to those who love paranormal romances, tragic pasts, finding your place in the world, great characters, wonderful dragons and a interesting storyline.