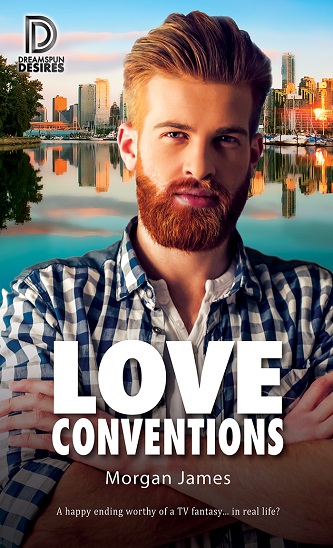 Blurb: A happy ending worthy of a TV fantasy… in real life?

Ashland Wells is an actor of sci-fi cult fame but with little direction for the future, when handsome grad student Remy Beaumont lands in his lap at a fan convention. Remy is everything Ash ever wanted and wished he could be—including out and proud. For twelve hours they’re the best of friends. But the convention ends, and saying goodbye to Remy might be the biggest mistake Ash has ever made.

A few months later, they’re reunited on a new production—Ash as an actor, Remy a writer—and though Ash doesn’t plan to let him go twice, being with Remy means going public about being gay. He’s not sure that’s a risk he—or his career—can handle, no matter how great the temptation.

If only they could write themselves the romantic happily ever after they both need.

Review: Love Conventions is a fun, sweet romance by Morgan James. Morgan James is a new author to me, so I didn’t know what to expect, but I loved the look of the whole pop culture side of things, so I was keen to read the book based on that.

The MCs are Ashland Wells, actor who has a sci-fi following from a cult hit which had been axed. Ash is out of a job for now and isn’t sure where his career is going but is more than happy to attend fan conventions and meet with the people that love the character he created on the small screen. Then there is Remy Beaumont, he is a fan of Ash (or rather the TV show), he’s a grad student who is so close to becoming a writer in his own regard when the two meet. Remy literally runs into Ash and the guys have a lot of fun at the convention until the day ends and they inevitably part ways. Ash liked a lot of what he saw in Remy and he regretfully leaves things at that, because he isn’t out. The two meet again a couple months later when Remy gets his first job as a writer and Ash takes this as a sign to embrace his true self. He has to show Remy that he isn’t afraid to show the world who he is and to nurture the budding romance between them.

The whole pop culture side of things was absolutely my thing. Remy was dressed as The Doctor, from Doctor Who and Ash was in a show that gave me some serious Fire Fly vibes. It was really cool for me. Remy and Ash had a great connection and I really liked their story. For whatever reason I didn’t feel total love and adoration for them and think perhaps this is because there was something a little lacking in the character development department. However, I wouldn’t mind reading more from Morgan James in the future.