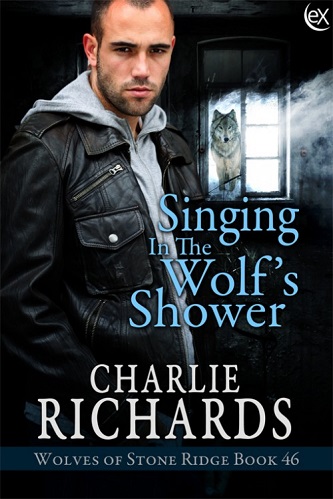 Title: Singing in the Wolf’s Shower

Blurb: Out of the Cage: A new wolf shifter enforcer accompanies his alpha to San Francisco on a rescue mission, but he discovers something even more valuable than a new pack.

Mishka Fadgen is new to the Stone Ridge wolf pack, and after losing a challenge to earn the beta position, he’s offered a slot as an enforcer instead. His first task comes soon, as the alpha’s daughter, Sara, goes missing from college. Mishka accompanies several others to San Francisco, following a lead to her whereabouts. While his alpha is busy consulting with a detective who’s aware of shifters, Mishka hits the streets and starts searching. What he finds, however, isn’t what he expected—his mate. Mishka discovers a young, crippled human living in an abandoned warehouse. With a lot of coaxing—and the promise of a good meal and a hot shower—Mishka convinces Aramis to join him at the home the shifters have rented. When the detective shows up, an untrusting Aramis disappears. Learning that Aramis may be able to help discover Sara’s whereabouts only heightens his need to find the man once more. If Mishka manages to track Aramis down again, can he convince his mate that his intentions are sincere and not just a means to an end?

Review: Sara and Stephanie have been kidnapped. You can guess the alpha and his mate are going nuts. Mishka was asked to go along also to help. Out on a ride to get a feel of the place leads him to the best scent, his mate. Although he might have a bit of a problem.

Aramis was kicked out of his home at the age of fourteen and had been living in an old abandoned building. His leg and wrist had been injured and never healed right add that in with being homeless and he has a bit of fear of others. However being offered food and shower would turn anyone’s head.

Now this is what I am taking about. Action, danger, excitement and some sexy times are just a bit of what you get in this story. I loved how the guys are with their mates and damn if it is not hot. This world the author has created is a big hit with me and sometimes gives me some good dreams in the evening. The characters are strong and the story sweet.

I loved this story and can guarantee that it will be read many times over. I can’t wait for the next book in this series and I would definitely recommend it.