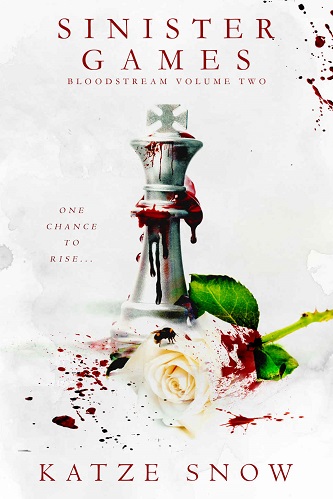 Blurb: When Vincent sold himself to a vampire, he did not expect to become the slave of Maddox Caine. Now struggling to accept the feelings of passion he’s grown toward his master, he’s agreed to follow Maddox into a war he never knew existed. This is what he’s been waiting for: to fight, to avenge, and to win. But what happens when another vampire threatens to put Vincent’s heart, not just his loyalties, to the test?

Emory Hudson was never meant to live past childhood. His uncle managed to save his life at every turn, but now Emory finds himself alone, on the desert, with an enemy claiming to be his ally. They both seek the one thing that can be fatal to a First Born vampire. Paired with this unexpected accomplice, Emory scours the Wastelands in search of the poisonous flower. No matter what the sacrifice, he will kill the Governor of Sanctuary Hope and save his uncle. It’s the least he can do.

In this depraved and desolate world, can Vincent learn to see that there is more to vampires than an insatiable lust for blood? And will Emory free his uncle before the war divides them forever?

WARNING: This world is a treacherous place. Creatures have evolved into unforeseen habitats, and beyond the elusive Sanctuary Cities, human survivors have been reduced to nothing more than bloodthirsty maniacs. It is not for the faint-hearted and due to the extreme level of high heat, it is for mature audiences only. This series will only get darker and better.

Review: I love all types of characters but I believe I have found a character I absolutely despise as a MC and that is Maddox. There is no redemption for this vampire in my eyes. My heart is breaking that Vincent seems to have Stockholm syndrome where Maddox is concerned and believes he must endure Maddox treatment as a way to save his people. Enough about Maddox lets move on.

There is Cerebus, who I am on the fence about as I do not know enough about to say one way or another whether I like him or not. Emory meets Nick but is wary of him and I do not blame him with everything he has been through. There is a war brewing on the horizon and things are being planned as allies are being made.

I do like this series but Maddox is a bit much for me. I do not like him whatsoever. I cannot imagine him having any feelings for anyone other than his own wants and needs. I was hoping he would change in this story but alas he has not.

I am curious as to what the war will bring and who all will be involved in the battle if it comes to that.