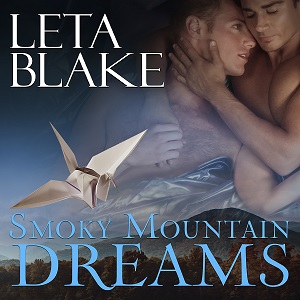 After giving up on his career as a country singer in Nashville, Christopher Ryder is happy enough performing at the Smoky Mountain Dreams theme park in Tennessee. But while his beloved Gran loves him the way he is, Christopher feels painfully invisible to everyone else. Even when he’s center stage he aches for someone to see the real him.

Bisexual Jesse Birch has no room in his life for dating. Raising two kids and fighting with family after a tragic accident took his children’s mother, he doesn’t want more than an occasional hook-up. He sure as hell doesn’t want to fall hard for his favorite local singer, but when Christopher walks into his jewelry studio, Jesse hears a new song in his heart.

Review: Listening to the audio of Leta Blake’s Smokey Mountain Dreams was just audio bliss. There were so many elements of things that I love in an MM book – which I’ll get to in a second. The one thing that was new and different to me was the author and it was certainly a wonderful introduction to a new author and their writing style. Honestly, after listening to this one I am definitely open to either reading or listening to more of Blake’s work.

Now onto the elements that this book has that I love. I’ll list them off and if you got a similar list of likes to me, then this is probably the book/audio for you:

– John Solo narrating – honestly, sometimes that’s all I need,
– Good old Southern charm, manners and hospitality,
– One broken hero and one sweet hero, who in his own way is also broken,
– Sweet kids in need for someone to help keep their family together and mend their father’s heart,
– Two men that are not flawless, their characters and story completely relatable,
– A proper misunderstanding right at the end before anyone can ride off into the sunset, kissing,
– The story of Sadako and the One Thousand Paper Cranes is referenced numerous times. As a kid, I loved this story and was probably the first book that made me cry when I read it at school when I was eight or nine. Fast forward close to twenty years and reading about her story at Hiroshima A-Bomb Museum/Peace Memorial had me ugly crying even more than when I first stepped into the Museum.

The story is about Christopher Ryder. He’s a country singer who never made it in Nashville but makes a decent living in the small town (apologies name has completely escaped me) at the town’s main source of income from the tourist dollars – the theme park Smoky Mountain Dreams. The theme park itself something akin to Dolly Parton’s country and western theme park, not that I know much about it, but for people as clueless as me, that is probably what you’ll think of. Christopher doesn’t have a heck of a lot of confidence in his own abilities, but he enjoys being the step-in actor/singer for the town’s much loved but very much drunk (and debauched) son, Lash. Christopher is a total sweetie, but has had a difficult time from his family, his only real family are his beloved grandmother (as well as his brother in law, Joe, who as a secondary character I fell in love with). He is happy and content with his life, though he has not been lucky in his love life lately.

Christopher’s grandmother is the key to much of the story. She, hilarious woman that she is and another secondary character I fell in love with, is the instigator – whether meaning or not – of most of the story. As it is, her voice is also the voice of Christopher’s conscience, which is also quite amusing. His gran is the type of Gran everyone loves but few of us have had in real life. It is Christopher’s love for her which starts him on the path to the town’s jeweler, Jesse Birch.

Jesse’s life is just as complicated as Christopher’s, which is what I love about both MC’s, their lives are anything but simple but still totally relatable. Jesse is basically a widow (it’s complicated), he has two kids, he makes beautiful jewelry and he is totally in need for someone with as much sweetness as Christopher has to offer to help heal his broken heart. The kids also need some healing, but I enjoyed that Christopher’s sweetness didn’t win over the kids immediately, I liked that both guys needed to put in a lot of hard work and made many mistakes along the way.

The two events at the end of the story, which helped give the guys the final push their romance needed, was not unexpected to me. I knew that either one or both had to happen for the story to finish and I liked how that was executed.