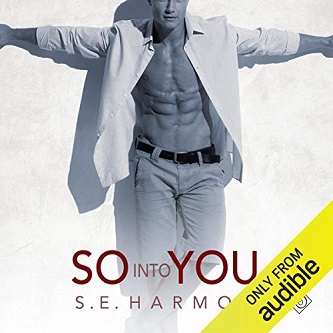 Title: So Into You

Blurb: Screenwriter Noah Ashley has a few four-letter words for his agent when she suggests he im-prove his script by shadowing a PI. Still, because he’s an artist dedicated to his craft and she knows where the bodies are buried, he agrees. Then he spends a little time with the gorgeous PI, and suddenly it seems like a really good plan. The PI doesn’t seem to entirely love the idea, but Noah has never been afraid to go after what he wants.

PI Drew Rodriguez is used to people depending on him. He’s the classic rock for his family. Re-sponsible. Dependable. The classic rock would never succumb to the borderline sleazy tempta-tion of friends with benefits, no matter how sexy that temptation is. Drew is looking for some-thing enduring.

Despite Drew’s misgivings, it’s not long before they’ve got all the requisites for friends with benefits going. Friendly, good conversation? Check. Fun times in and out of bed? Check. Hot, electrolyte-sapping sex? Double check. Falling in love? Yeah. About that…

Review: So Into You is the second book in SE Harmons series, The PI Guys. Since I’ve never read or heard the audio of the first book (and I couldn’t tell from my Audible App that this was book 2 of the series), I can say quite honestly that this can be read/listened to as a standalone book, or at least done out of order. Listening to the book and hearing about the couple that are the stars of book 1, I am intrigued and totally keen about getting the first book. I didn’t really know what to expect, as SE Harmon is an author that I’ve heard of but I’m not 100% sure if I’ve read anything by them.

The story starts out with Hollywood script writer, Noah Ashley, just as his personal life goes off the rails, endangering his professional life. Noah is a bisexual man whose ex-wife is still not only his friend but also his manager. He’s just found out his ex-boyfriend Marshall – well, now ex – who he penned a movie script to help further his career as an actor, has slept with another man to further his career. On top of that, the third movie in the popular action franchise may well be re-cast with another actor, Sean Fox who has more talent and unashamed when it comes to his sexual activities. After a proper bender on the booze, a one-night stand and a missed meeting for the new movie, he’s sent out of state, to Florida to get his shit together and get his script resembling a hit movie. While in Florida, his agent has set up a contract for him to shadow a PI, to help him get his script in shape. Noah also has a heap of baggage, after spending his life in the foster system, he found his biological mother a few years before. She is now a schoolteacher with tween twin girls, to almost step kids and a fiancé. She also happens to live in Florida and is the reason why Noah had brought a place in Florida.

That PI is Drew Rodriguez. He’s quite comfortable in his professional life. After being in the military he and his friend started a PI business, and despite being surly and snarky, he does love his job. He just holds people to a certain standard and many so easily disappoint him. On the personal front he’s not as lucky. His father, who has been in and out of jail for most of his life, swans back in and just like every other time his father gets out of jail, Drew tries to hold his family together. Because the painful truth is that every time the man leaves or goes to jail again, it is Drew keeping his mother and little brother going.

#As I said, these guys are complicated. They both have a lot of trust issues and their circumstances have affected them very differently. Drew craves love and romance and finding the one man for him, while Noah wants nothing to hold him down, he just wants friendship and fun sex.
The book was narrated by Michael Stellman. Like with Harmon, the name rings a bell but I can’t, from the top of my head name a book I’ve listened to the audio for narrated by Stellman, so I went into this not know what to expect from either the author or the narrator. The narration was performed well, though. I felt that Stellman had the right tone to convey the complicated feelings and baggage of both MCs. I liked the softer tones which he used for Noah, while a slightly harsher tone was used for Drew. It fit the characters so well and helped me connect to the characters, particularly to Drew.

These characters have great chemistry. They are basically two sides of the same coin, so similar and yet so different. Their romance is a rocky one, even if both guys can be persistent. I very much got emotionally invested in both characters’ journeys. I enjoyed how this played out, this wasn’t an insta-love or a romance where the wary parties change their mind in a minute and go headlong into commitment.

I recommend this one for people that like a little bit of Hollywood, a little bit of celebrity, as well as a some fun and action with a PI/cop-type character. I really liked how both characters were jaded in their own way and added to the relatability of both guys.