Hi peeps, we have Kevin Klehr stopping by today with his new release Social Media Central, we have a great excerpt and a brilliant giveaway, so check out the post and enter the giveaway! ❤ ~Pixie~ 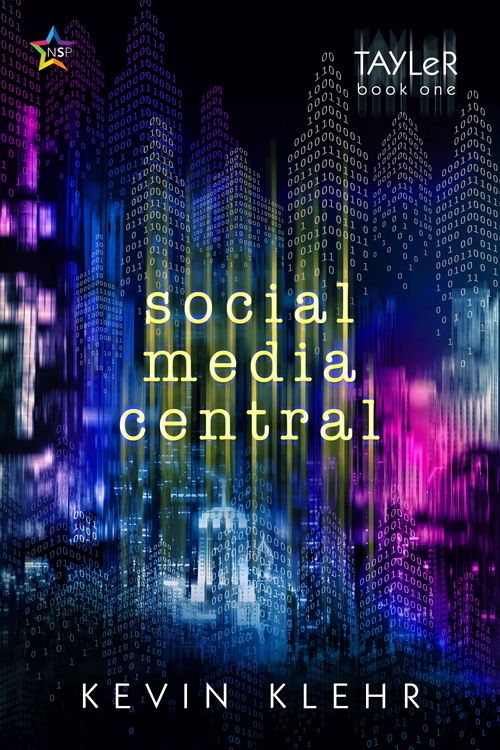 In an age where everyone lives their lives through a screen, no one has more celebrity status than fashion blogger, Madeline Q. In a chance meeting, Tayler, loner and geek, is introduced to her world of parties, fan worship, and seduction.

But as his own star rises, Madeline Q is arrested for murder. There’s just one problem—there is no corpse. Tayler soon learns that fiction blurs reality on Social Media Central. “If this is our future, then we’re already dead.”

I usually sat alone to eat lunch, but this man insisted on talking to me. How dare he? This was my park bench, my place of solitude, even if others were around. I politely smiled and bit into my salad sandwich, yet he continued.

“In my day, we talked to people. We knew what our neighbors were up to. The fact that we even knew our neighbors is a concept lost on these jokers.”

I scanned the gardens. It was the same sight every day. People my age addicted to their mobile screens as if their whole world centered behind the glass face. Keystrokes and terse commands took the place of spoken feelings and thoughts.

“Smoke and mirrors for an electronic age,” I replied. I took another bite.

“What’s your name?” the man asked.

“Tayler. It was the name of a vlogger my mum liked.”

He reached out his hand. I placed my sandwich on the brown paper bag in my lap so I could shake.

He wasn’t exactly a relic. To me, old men on the scrap heap spat bitterness and ignorance in equal measure. He did neither. He was middle-aged and had the gentle face of a charity worker. But he was far from needing charity himself. His white goatee was neatly trimmed, while his thinning hair could have been just groomed by an overpriced hairdresser. And his stylish knee-length burgundy coat could’ve had him walking into an advertising agency as either model or executive.

He peered at the soulless beings scattered through the park, all of them representing just one of a larger tribe. Their fellow natives supplied moments of importance on the devices, and at times, their own faces signaled their moment to shine. But a new comment meant the baton had passed to the next person who needed the spotlight.

“That’s why they like their small screens,” said Stuart. “It presents a world bigger than them, without needing the confidence to venture into that world. Look at them. The screens are smaller than the individual. Everything in perfect proportion.” He paused. “Where’s your small screen?”

“I use an old phone.” I pulled it from my shirt pocket. “I refuse to get involved with Social Media Central.”

“Wise man.” He pulled out his media device, also vintage.

“A time when a phone was just a phone,” I said.

“Please don’t change. My landlady is about your age, and she’s addicted to her cyberfriends.”

“What? Doesn’t she have real friends at her age?”

“She used to. I’d come home from work to the smells of her beef Wellington, her green curry, or some other culinary delight, knowing that within the half hour she’d be knocking on my door inviting me to meet some bosom buddy over dinner. And I’d return the favor. I dug out my grandma’s handwritten cookbook and tried something new. My landlady would bring down one of her cats, and I shared the evening with her while she gave me advice about money or love or something.”

“Love? With your looks, you don’t seem like a lad who needs advice on love.”

“Did your landlady break hearts?”

“She said she did, but I kept getting the impression that none of her lovers stayed around for long. We don’t do dinner anymore. We haven’t for two years.”

“Bloody Social Media Central. She lives on it. It’s her whole life. She’s part of a group that calls itself the Amazing Twenty. Twenty lost individuals who’ve never met but stay online for hours just to feel someone cares.”

“What about you, Tayler? Who are your friends?”

“I don’t know anymore. It’s harder and harder to connect. Social Media Central has taken away the few connections I had here and made them believe they’re part of that wider world you were talking about. So I sit watching old movies to pass the time. Movies that demand an attention span.”

People started chattering at the sight of a woman walking into the park. Her long red hair streamed like a waterfall down her neck, half covering the shapely mounds that heralded her arrival. The people of the park snapped her image as if their devices could capture true beauty.

“Madeline” they called, echoing her name around the park.

Groupies ran up to get a closer shot. One woman in a white shirt fainted in her boyfriend’s arms. He dragged her to a nearby bench and laid her down. A guy with rounded glasses, similar to mine, tried to plant a kiss on her cheek. She reached into her tiny handbag and pulled out a fan, swiping the air between him and herself. He pulled back and looked to the ground like a small boy coming to terms with adult behavior.

She then noticed me, so some of her devotees took my photo. Stuart gave me a wink as she strolled toward me.

I shook my head.

“What a weird yet reassuring surprise.”

“As you can see, my fan base likes to go nuts.”

“It’s your outfits, Miss,” one cried. “I need to know what to wear before the season ends.”

Now that two of her best assets were in my face, I breathed in the scent of her black leather top. Small laces crisscrossed her cleavage. My wayward thoughts were interrupted when she placed her long-nailed finger under my jaw. She pushed upward, raising my head to study my face.

“I’m not that easy, sweetie, even with those that intrigue me. And trust me, you intrigue me. What’s your name?”

I mumbled, not making sense.

“And what a small universe that must be.”

“You tired old man, do you even know who I am?”

“The latest vlog sensation? The latest reality web-series loser? It doesn’t matter, princess. You’ll be forgotten by the end of the year.”

She still pushed my jaw upward. “You think I’m special, don’t you, Tayler? You may not know what power I have over these hordes, but let me assure you, I have power.”

“We need to talk about this beard of yours. It’s shabby chic.”

“It’s short but not elegantly trimmed like the has-been’s next to you.”

“Let me guess, you’re about twenty-three?”

“I see, only ten years younger than me. Well, Tayler, the next time we meet, and we will meet again, I want you to wear a black T-shirt. This lazy checkered top is not doing your stylishly rough metro-beard any justice.”

She removed her finger and blew me a kiss. The park folk applauded, taking more snaps of us both. She presented me with a business card from her handbag, her name spelled out on the scarlet background in a classy black font I had never seen before. She turned on her heel and walked away. Others followed like kids drawn to a piper’s flute.

“Well, it looks like you’ve been touched by celebrity of some sort or another,” said Stuart. “But kids today celebrate the mundane so I’m sure her appeal has a shelf life.”

I nodded, more to shut him up than to agree. I read the small print above the phone number on Madeline’s card: Fashion Icon and Blogger. I then placed it carefully in my top pocket.

“What are you grinning about?”