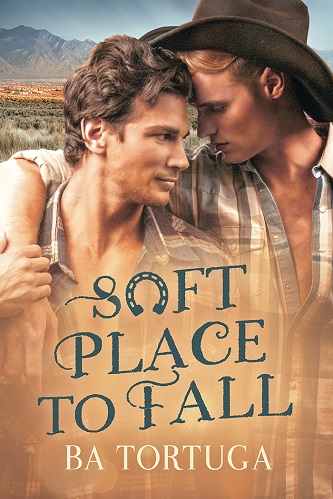 Blurb: Stetson Major and Curtis Traynor are about as opposite as two cowboys can get. Stetson is a rancher, tied to the land he loves in Taos, New Mexico, while Curtis is a rodeo cowboy whose wanderlust never could be tamed.

But now Stetson’s momma is dying of Alzheimer’s, and she can’t remember that Curtis hasn’t been Stetson’s boyfriend for a long time. Curtis’s absence makes her cry, so Stetson swallows his pride and calls his ex-lover.

To Curtis, Stetson is the one who got away, the love of his life. And Momma is his friend, so he’s happy to help out. Yet returning to the ranch stirs up all sorts of feelings that, while buried, never really went away. Still, the rodeo nationals are coming up, and Curtis can’t stay… even if he’s starting to want to, especially to support Stetson when he needs it most.

Stetson and Curtis want to find a place where they both fit, to be there to catch each other when they fall. But family, money problems, and the call of the rodeo circuit might end their second-chance romance before it even gets started.

Review: Soft Place to Fall is a contemporary western romance by BA Tortuga, which means its just about everything that I expect from a Tortuga novel. BA Tortuga has very recently gone close to the top of my must read author list and I really, at the absolute minimum like, each and every one of them, especially the cowboy romances, because those are so freaking hot!

Soft Place to Fall is a story about second chance love, which I know will appeal to a lot of people, on top of the whole contemporary cowboy romance.

Stetson and Curtis were in love years ago and they were in a very serious relationship. However, their lives were not compatible and I suppose that they were too young to really compromise to fight for what they have together. And so for eight years they have been apart. All that changes when Stetson’s mother, who has Alzheimer’s and is in her last weeks of life, keeps asking to see Curtis. She loved Curtis and Stetson sometimes felt that his mother loved his boyfriend more than she did him. After all, Curtis is a free spirit and fierce rodeo rider like Stetson’s much beloved father had been, which is probably part of why she had approved of her son’s boyfriend back in the day. On the other hand, Stetson is a home body and prefers to pour his time and energy into the ranch, which is taking some hard hits as Stetson tries to pay for his mother’s medical treatment.

When Stetson calls and tells Curtis what has happened, he drops everything and runs to his ex and his mama. This is the first sign that these guys, although parting after a fight, had never lost their love for each other. Unfortunately, when they were younger, love wasn’t enough when their lives were taking them into two different directions.

I feel this is a story that shows that love and people mature and perhaps these guys had to wait before being at the right place, at the right time before they could be together with their HEA. I think that is the aspect of the book that I enjoyed the most, aside from the wonderful chemistry between Stetson and Curtis.