Hi guys, we have D.J. Jamison stopping by today with her new release Surprise Groom, we have a great excerpt and a brilliant $15 Amazon GC giveaway, so check out the post and enter the giveaway! ❤ ~Pixie~ 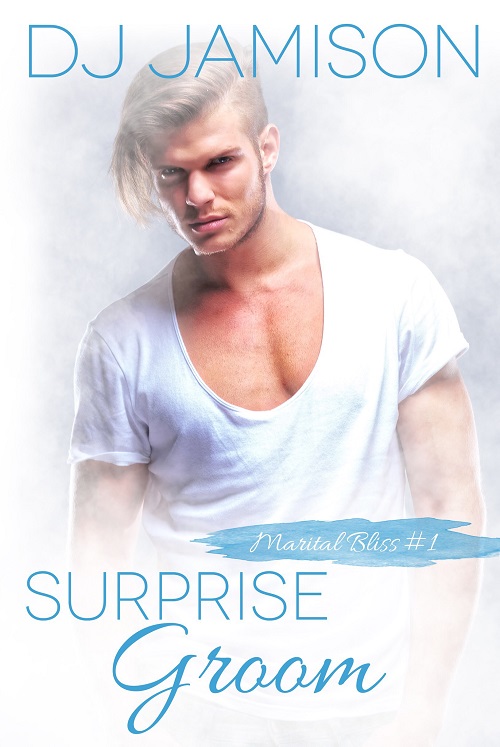 Can two men fake their way to marital bliss?

Caleb Taylor is shocked to learn his family could lose Bliss Island Resort — their home and livelihood — unless he makes use of a clause to marry the child of investor Louis Chastain. Sofia Chastain is more like a sister than a love interest, and Caleb isn’t ready to sign over his future. But Sofia has a brother, and Caleb has a plan …

Julien Chastain was disowned at fifteen and has made a life as a go-go dancer in Miami, but he lives paycheck to paycheck. When his childhood friend proposes an outlandish marriage contract, he thinks he’s crazy. But it’s a chance at a future that’s tough to pass up.

Caleb and Julien must present themselves as an authentic couple for the legal loophole to work, but the lines between “fake” and “real” keep shifting as they navigate intimacy, public scrutiny, and sabotage.

Love isn’t part of the plan, but plans change. If they can outsmart Julien’s father and prove their love is worth more than a transaction, they just might find a true happily-ever-after.

“Should we kiss?” Caleb asked.

Julien gave him an arch look. “My answer to that question is always yes.”

Caleb chuckled awkwardly. “For the selfie, I meant.”

“Okay, shut up and put your lips on mine,” Caleb said.

“Oh, baby. Your dirty talk is off the charts.”

In contrast to his soft lips, Julien’s hard chest pressed against Caleb’s shoulder. His right arm was behind Caleb, fingers brushing his neck, and his left hand slid down to just over Caleb’s upper chest. Their position was a little awkward, Caleb’s neck craned to the left, and he had his right arm outstretched for the selfie.

The kiss wasn’t getting his entire focus as he fumbled with the phone in his hand. Even with his attention divided, even with the very un-sexy circumstances of why they were doing this, the kiss felt real. Just as real as any he’d shared with a girlfriend. Maybe even more so. Julien had been the most important person in his life once. He couldn’t say the same for any of his short-lived girlfriends.

It took only seconds to break through Caleb’s self-delusion. His surety he wasn’t into men that way. He liked Julien’s lips on his.

Julien shifted, then slipped, and they were ripped apart by gravity as he nearly faceplanted in Caleb’s lap.

“Whoa!” Caleb said, catching Julien’s shoulder with one hand. “Trying for second base already? Or is that third? Not sure with guys.”

“I slipped! I had my arm braced behind you, and the pillow moved, or—”

Julien pushed himself upright, his hand leaving a brand of warmth on Caleb’s thigh, before he pulled away. Grabbing the pillow behind his head, he smacked Caleb in the head. “Asshole.”

“I was kidding. I’m sure you’re much smoother when you’re actually trying to put the moves on someone.”

Julien flipped him off. “That picture better be worth it.”