Hiya peeps! We have Angel Martinez stopping by today with the tour for her new release Mage On The Hill, we have a brilliant guest post from Angel, a great excerpt, a fantastic giveaway and we also have Shorty’s review, so check out the post and enter the giveaway! ❤ ~Pixie~ 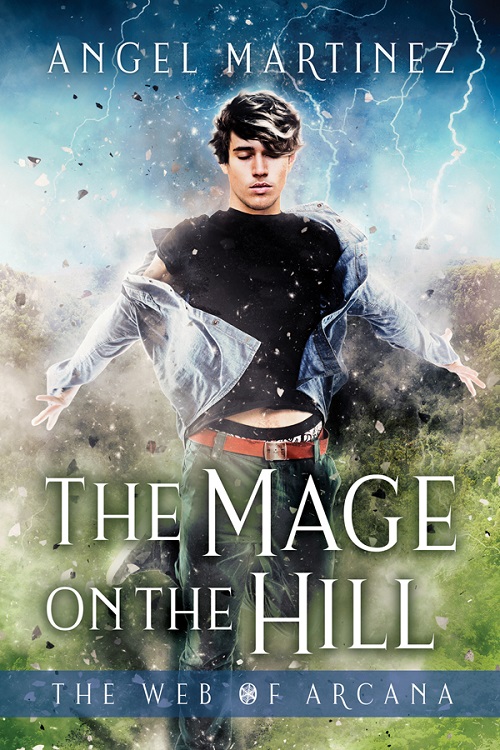 Mage on the Hill

Toby’s wild magic is killing him. The mage guilds have given up on him, and it’s only a matter of time before he dies in a spectacular, catastrophic bang. His only hope is an exiled wizard who lives in seclusion—and is rumored to have lost his mind.

The years alone on his hilltop estate have not been good for Darius Valstad. After the magical accident that disfigured him and nearly drowned Pittsburgh, he drifts through his days, a wraith trapped in memories and depression. Until a stricken young man collapses on his driveway, one who claims Darius is his last chance.

For the first time in fifteen years, Darius must make a choice—leave this wild mage to his fate or take him in and try to teach him, which may kill them both. The old Darius, brash and commanding, wouldn’t have hesitated. Darius the exile isn’t sure he can find the energy to try.

Care of Your Introvert

Darius Valstad is an introvert. Anyone who has read The Mage on the Hill, well, perhaps some readers, will say, but wait… He was comfortable with public speaking before things happened. He was assertive and authoritative. Hmm. Yes. Did you know that introverts can be all of those things? Good public speakers, sociable at parties, assertive, confident? Yes, all of these things are possible.

You can’t always spot an introvert by external behavior or by how they interact with people. The difference between and introvert and an extrovert is internal. An extrovert gathers energy from interaction. An introvert will, sooner or later, be drained by it.

Of course, your introvert might indeed be overwhelmed by people, and crowds, and terrified of public speaking. Introverts come in all sorts. Regardless of external behaviors, here are some things to keep in mind.

Understand your introvert’s personal space boundaries: Some introverts are touch hungry. They want hugs and snuggles, will lean on your shoulder, and stand very close. Sometimes, this is only a thing that happens with people they trust. And some introverts would very much rather you didn’t touch them at all. Be sensitive to this and understand that not everyone needs touch.

Ask if they need an escape signal: Many introverts will hit a no-go point during prolonged interaction, a point where they need to withdraw and regroup, recharge. Some are able to put this off until the interaction is officially over. Others need a quick escape. If your introvert gives the signal for escape, let them. Help them if they need it, but mostly respect that need for a few minutes of solitude to regain their balance.

Don’t be afraid of silences: Even an externally sociable introvert needs them sometimes. Silence isn’t a bad thing. It doesn’t mean your introvert is angry or annoyed with you. They are thinking. Processing. Possibly reading. If you would like to say something or tell a story, go ahead. Your introvert probably likes to listen. Just don’t be offended if it’s one of those times when you’re not getting substantial answers.

Understand being together: Your introvert likes being with you. They really do. But they don’t need constant chatter. They don’t need to be entertained all the time. They’ll most likely be quite happy sitting on the sofa with you as you both read different books or if you’re watching movies or binging on a TV show with snacks.

Your introvert friends love you. They just need you to give them some space.

It’s killing him. We have to end this.

Too cruel to force him to keep struggling.

I don’t understand. He should be finding a minor channel at least. Something. He shouldn’t be at this level of physical distress and still be able to throw so much.

We can’t condone pushing on. Dangerous for him and for everyone in a five-mile radius. We’ll have another Darius situation on our hands.

As soon as he’s able to hear it, yes.

Toby drifted from gray misery to scarlet agony, the voices floating to him in fits and starts. His instructors, the director—they were talking about him and they sounded done with him, just like the previous six guilds that had tossed him to the curb. Wild magic. Unplaceable on the web of Arcana. Unsustainable and eventually deadly. The only remaining bets anyone could make now were how many people he took with him when he went out with a catastrophic bang.

Hands lifted him. The familiar sensations of stretcher and rolling followed him down into the dark.

“What’s this?” Toby peered at the papers on the rolling tray, not quite up to focusing through his pounding headache.

The director pulled a chair close and cleared his throat uncomfortably. “We discussed that this might be a possibility someday, Tobias.”

“We’ve talked about a bunch of stuff.”

“Not saying it to be a smartass, sir. I can’t get my eyes to read this just yet.” Toby shifted on the infirmary bed. His fifth stay in this wing of the guildhall and the mattresses hadn’t managed to grow any more comfortable. “Couple hours I should be able to.”

“Ah. My apologies.” The director returned to a concerned parental pose, hands clasped between his knees as he leaned forward. “These are your separation papers from the Montchanin Guildhall.”

Toby swallowed hard. “You’re giving up on me? Already?”

“Nearly. You said nearly.” Despite his pounding head, Toby sat up, hanging on to the director’s hand as hard as he could. “Please don’t do this. You said you’d help me.”

“We said we would do the best we could. Wild magic…. It’s unusual, certainly, but cases of unplaceable wild magic like yours aren’t unheard of. We should have seen some sign of channeling by now. Some directed trickle that would have let us help you find your place in the web.”

Toby let go to fall back against the pillows, hurting, nauseated, and dizzy. His uncontrolled magical explosions, each one harder on him than the time before, had only been getting more volatile and unpredictable. “I don’t have anywhere else to go. Can’t I stay here? Until, well, until….”

“It’s too dangerous for the other students. For the staff and other guild members.” Director Whittaker took his hand again. “Tobias, you blew a hole in the guidance room’s wall today.”

Ten feet of weapons-grade Kevlar and steel—that shouldn’t have been possible. Holy crap. “Did I hurt anyone?”

“Not today. But I can’t risk lives any further. It’s reached that point where we’ve tried everything we could. When you feel up to it, read the packet. There are several wonderful hospice options nearby. Beautiful places where you’ll be cared for and made comfortable. The guild will take care of you and cover any expenses.”

Drugged to the eyeballs so I won’t do any more damage. Allowed to starve to death in the nicest possible surroundings. Toby closed his eyes, his exhausted brain banging up against walls of possibility, trying to find him a way out. All this time he’d been sure one of the guilds would find a way. They were the experts. Now? Now he was terrified. The experts were telling him he needed to accept his impending death. No, no, no, fuck that. “Sir, who’s Darius?”

“Ah, you heard that, did you?” The director sat back and pulled out a microfiber cloth to give his glasses a meticulous cleaning before he went on. “Darius Valstad caused one of the greatest magical disasters in recent memory. He nearly destroyed Pittsburgh. He pulled magic too far from his channelings, the result much like a wild magic accident. The catastrophe was narrowly averted.”

“Oh. That sounds about as bad as it gets. What happened to him?”

“He nearly died. His guild status was revoked, his teaching of any more students forbidden.”

Toby turned that over a few times, his brain fumbling and dropping concepts along the way. “So, but he’s still alive?”

“As far as I know. He lives in isolation, oh, not far from here, with the promise that he will no longer attempt anything beyond personal magic.”

“But he was once like me? And he lived?” Toby knew it was conclusion jumping, but he was desperate enough to reach for anything.

The director’s sigh was slower this time, more melancholy. “Tobias, he found his channels long ago, both his major and minor Arcana. Yes, he lives because as long as he respects the web, his magic won’t tear him apart. He had some early success with teaching unplaceables, but Pittsburgh was the ultimate result of his unorthodox methods.”

Director Whittaker rose with one last pat to Toby’s shoulder. “Get some rest. We’ll talk again in the morning. Please keep in mind we’re not simply turning you out onto the street. We want to be certain you’re looked after properly.” The unlikely black sheep of an ivory tower intellectual family, Angel Martinez has managed to make her way through life reasonably unscathed. Despite a wildly misspent youth, she snagged a degree in English Lit, married once and did it right the first time, gave birth to one amazing son, and realized at some point that she could get paid for writing.

She currently lives in Delaware in a drinking town with a college problem and writes Science Fiction and Fantasy centered around gay heroes. 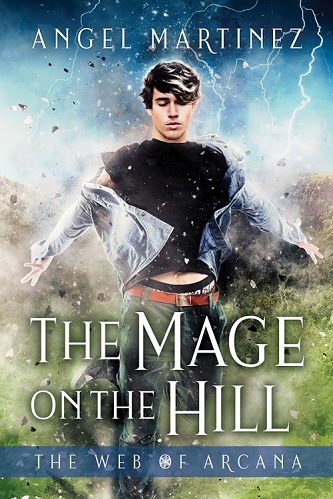 Title: The Mage on the Hill

Series: The Web of Arcana 01

Blurb: A young magic user who wants desperately to live. A jaded recluse who has forgotten what living means. They’re each other’s only chance.

Toby’s wild magic is killing him. The mage guilds have given up on him, and it’s only a matter of time before he dies in a spectacular, catastrophic bang. His only hope is an exiled wizard who lives in seclusion—and is rumored to have lost his mind.

The years alone on his hilltop estate have not been good for Darius Valstad. After the magical accident that disfigured him and nearly drowned Pittsburgh, he drifts through his days, a wraith trapped in memories and depression. Until a stricken young man collapses on his driveway, one who claims Darius is his last chance. For the first time in fifteen years, Darius must make a choice—leave this wild mage to his fate or take him in and try to teach him, which may kill them both. The old Darius, brash and commanding, wouldn’t have hesitated. Darius the exile isn’t sure he can find the energy to try.

Review: Toby is being killed slowly by the wild magic inside him that he can not control. Having gone to many guild’s for help has not helped. The last guild he goes to wants to in a sense put him down for good before the magic causes a catastrophe. Toby flees to find another like him that can help, Darius, who was outcast after he lost control while trying to help someone who had the same problem Toby does.

The two do everything in their power to control the magic flowing through Toby. Toby meets Darius’ other students like himself who had trouble with various magic’s that Darius had helped. All the while trying to stay out of the guild’s grasp. I loved this story and the way it was told.

Fascinating and intriguing it caught my attention from start to finish. The magic aspect was appealing and somewhat horrifying in what could happen if not controlled. The characters were unique in their abilities in that they struggled at times with their gifts.

Amazing beginning to a series I am looking forward to reading more of.