Hi guys! We have Asta Idonea stopping by today with her new re-release Souls for Sale, we have a great excerpt and a brilliant $10 NineStar GC so check out the post and enter the giveaway!  ❤ ~Pixie~ 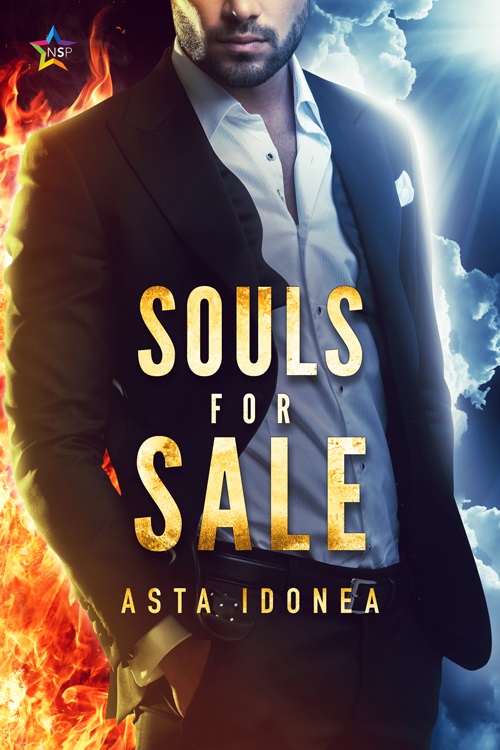 When demon Saul persuades comic book artist Tom to sign over his soul in exchange for a night of passion, little does he know what lies in store. Demons can’t fall in love—or so he’s been told—but he finds himself smitten and attempts to destroy the contract, desperate to save Tom from an eternity of torture.

With Saul and Tom forced to run, a showdown between Heaven and Hell ensues as the angels and demons argue over who owns Tom’s soul. But does either party have a stronger claim than Saul?

It’s tough being a demon in this day and age. Times are hard and souls just aren’t what they used to be. I should know; it’s my job to collect them. Or try to, anyway. What I wouldn’t give to go back to the good ol’ days when you could buy a soul as easily as an apple at the marketplace. And I mean a proper apple, plucked straight from the tree that morning. None of this modified, refrigerated crap that passes as fresh fruit nowadays.

I know what you’re thinking. Trust me; I’ve heard it all before. You’re wondering how it could be so hard to get someone to sign away their soul in an age when everything can be obtained for a price, when everything is for sale. Actors, bankers, politicians. You’d think rich pickings; am I right? Well, you’d be wrong.

Problem is that no one believes anymore. Picture this: I walk up to someone and offer to grant them anything their heart desires in exchange for their soul. Now, in times past they’d either tremble in fear and drop to their knees, praying to the guy upstairs (my cue to leave), or they’d tremble in fear for a moment and then sign on the dotted line. Simple. Everyone knew where they stood. But if I were to try that today, most people would laugh in my face and walk off, or else they’d look uneasy and slink away from the ‘deranged lunatic’ as soon as possible. Hell, I miss the fear.

The faith is gone, you see, supplanted with technology, gizmos, and gadgets. An age of information. Everything you want, obtainable at the press of a button. What is there to long for anymore? What is there worth selling your soul for that you couldn’t get another way? Sure, you still have the old standards, the favourites—riches, power, and sex—but as I said, the belief is sadly lacking.

Every passing year it gets harder and harder to fill my quota. I have the boss breathing fire down my neck—both metaphorically and literally—and damned if I know how to get around the problem. It’s not just me. My colleagues are equally exasperated. It won’t be too much longer until it’s impossible to sign up even one new soul to burn in everlasting Hell. Then what’s a conscientious, hard-working demon to do?

Anyhow, I guess it’s about time I introduced myself. The name’s Saul. Yeah, I know, but it’s not like I picked it. We get what the boss dishes out, and I drew the short straw that day. Guess he was in one of his funny moods. I’m here today following a mark. I’m actually pretty stoked I found this guy, as he’s shaping up to be the most promising potential soul-seller I’ve seen in several months. Hey, try saying that three times fast! The trick now is not to rush things, not to push him too hard or too fast.

Oh, here he comes. See if you can pick him from the crowd. No? Hard, isn’t it? Everyone looks the same these days. It used to be so much easier to tell a sinner from a saint. Now the line is so blurred it barely exists at all.

But I digress. Just wait a moment… There! See the guy heading into the pub? The one in the Marvel T-shirt? With the blond curls? That’s our man. Bit of a stereotype of a comic-book nerd, isn’t he? Unlikely to sell his soul, you think? Well, we’ll soon see. Asta Idonea (aka Nicki J Markus) was born in England but now lives in Adelaide, South Australia. She has loved both reading and writing from a young age and is also a keen linguist, having studied several foreign languages.

Asta launched her writing career in 2011 and divides her efforts not only between MM and mainstream works but also between traditional and indie publishing. Her works span the genres, from paranormal to historical and from contemporary to fantasy. It just depends what story and which characters spring into her mind!

As a day job, Asta works as a freelance editor and proofreader, and in her spare time she enjoys music, theater, cinema, photography, and sketching. She also loves history, folklore and mythology, pen-palling, and travel, all of which have provided plenty of inspiration for her writing. She is never found too far from her much-loved library/music room.