Hi peeps! We have Jaime Samms stopping by today with her upcoming release Sunshine in the Dragon’s Heart, we have a fantastic guest post from Jaime where she tells us her favourite fantasy critters, and we have a great excerpt, so check out the post and enjoy! ❤ ~Pixie~ 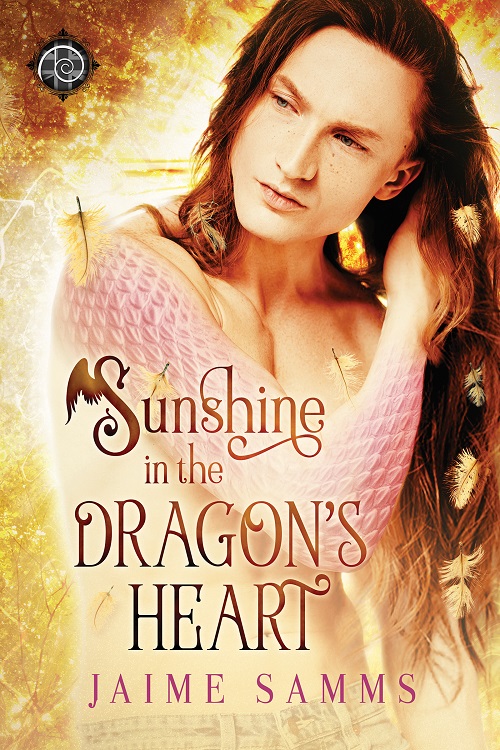 Sunshine in the Dragon’s Heart

When Sunny retires to the northern Ontario wilderness to mourn his parents’ deaths, he’s hoping the change of scenery will afford him some peace and quiet.

His hopes are soon spectacularly dashed.

In self-imposed exile, dragon Emile runs across the Fold between his dimension and Sunny’s—and right into Sunny’s arms. Centuries out of touch with human culture, bright, beautiful Emile incinerates any hope Sunny had for an ordinary existence. With dryads and water sprites coming to life all around them, Sunny can’t deny the magic Emile brings to his life—or his heart. But that same magic leads the unrelenting dragon who would keep Emile captive right to them. To save his love, Sunny will have to reach deep and find some magic of his own.

My five favourite fantasy critters. (Next to dragons, of course!)

It seemed fitting to talk about what fantasy creatures I love the most—and so maybe might write about in the future, one never knows! So, in no particular order… 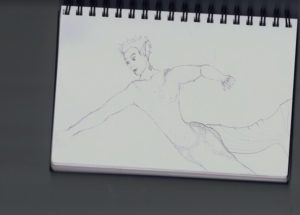 1) Mermaids. Well. To be more precise, merpeople, and mermen in particular. Because living under the sea seems like something that would be super cool, and we don’t really know what’s under there, do we? Not really. I think we only know a very small percentage of what happens under the waves where we can’t see and maybe will never be able to visit. 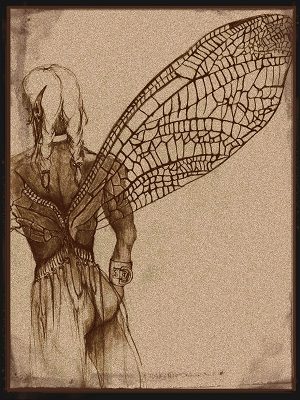 2) Tiny fairies, ei: mini people with wings. I’d love to explore how being a few inches tall would impact your life. Not sure if that would make a great romance, but I like to think about it.

3) Griffins. Creatures that are not birds or lions or lizards, and yet are all of those things at once. Are they fierce? Can you get close to them? Will they rip you to shreds or just watch you curiously until they fly off into the blue. Inquiring minds want to know!

4) Centaurs. Like a lot of girls, I loved horses growing up. I always wanted one. Still do, if I’m being honest. And then the centaures in the Harry Potter movies caught my interest, and my rain has since been wrapping around how to make a shifter story where human is human, but creature form is still a little bit human. How would that work?

5) Gargoyles. Not just the cartoon ones, either. But an entire civilization of creatures who are stone by night and doomed to flesh and blood under the sun. If gargoyle is their natural state, how do they deal with the curse of being all soft and squishy for half their existence? This is something that is just begging to be a sexy, spicy romance, non?

And of course, dragons, because there are always dragons. I’ll probably write more dragons some day. Maybe in this world, maybe in a different world. I haven’t decided yet, but my brain is always turning ideas over and over. 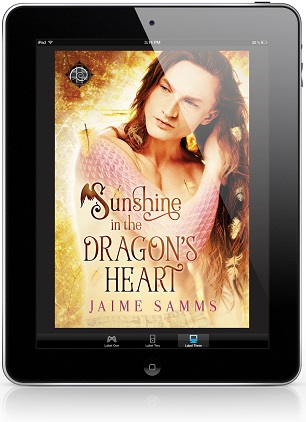 THIS WAS ALL his.

More to the point, it was only his.

Sunny hopped out of his old Land Rover and surveyed his domain. He’d driven forty-five minutes to get here and appreciated that the spring thaw—and the resultant muddy mess—had dried to summer grasses. Once winter-bare branches now sprouted rustling leaves of early June, adding dancing shadows to the display. A grin spread slowly over his face. The front yard sloping gently away from the covered porch of the compact cottage would be ideal for his planned gardens. Behind that, various outbuildings waited under the eaves of towering pines.

Besides the city being almost an hour away, the nearest town, a small hamlet with a general store, an LCBO, and a mobile library, was a thirty-minute drive in the opposite direction. His nearest neighbour was ten minutes away. One hundred fifty-six acres all to himself. No one dropping by to borrow a cup of sugar. No media. No awkward questions about his parents or how he was feeling.

Isolated? Hell yes. Just the way he liked it.

He pulled the deed from his back pocket and unfolded it to take another look. Yep. There was his full name in all its hippie glory, right there, neatly typed on the line marked “Buyer:”

That had gotten him a skeptical look from the realtor, but his ID bore it out. He couldn’t help what his free-spirited parents had thought was a good name. At least he’d fared better than his little sister, Moonpetal Daisyleaf.

As of today, Sunny had everything he wanted or needed: his small spread, his tiny home, and the dog—Fernforest, because his mother could never resist, could she?

“Shit.” The familiar burn of anger and loss caught at his throat, stung his eyes, and he ground his teeth, blinked it away. After turning back to the Land Rover, he opened the passenger door and motioned to the dog. “Let’s go, Ferny. Time to check out our new place.”

The dog, a knee-high mutt with wiry tan-coloured hair and a skinny but deadly tail, yipped at him and, as was his way, tumbled out onto the grass.

“You’re an idiot,” Sunny chided, affection spilling into his voice. Ferny grinned at him, wagged his back half, and then his nose took over. He whipped his head around, gaze and nose trained on the bottom of the yard. When Sunny said his name again, Ferny’s ears pricked distractedly, but then he was off.

“Hey!” Sunny hurried after him to a trail that led along a short, crooked fence struggling to hold back a raspberry bramble. The path jogged over an arched wooden bridge, then disappeared quickly under the canopy of poplar leaves, taking his curious dog with it.

Not even a yip in response.

“Dammit. Asshole dog!” Sunny hadn’t brought the dog out here yet. If he took off into the woods with no previous introduction to the area, Sunny might never get him back. “Fernforest!”

He dug his hands into his hair, curls turning around his fingers and gripping them in their wild tangles. Why was today the day Ferny chose for a display of independence he’d never shown any inclination towards before?

“Shithead dog. Fernforest!” Sunny ignored the rickety creak of the bridge as he crossed it into the trees.

“BLAST.” EMIKKU—he was going to have to come up with a more human-sounding name—ducked behind a clump of foliage. He didn’t have the energy to run, and if he didn’t act fast, that dog was going to sniff out his hiding place.

Closing his eyes, he focused and managed to mask his scent as the dog plunged into the forest. The crackling of leaves and twigs gentled to snuffling as the animal discovered a chipmunk’s den. Emikku let out a breath, soft as the summer breeze around him.

The house had seemed like it would be perfect. For days he’d watched to make sure it was abandoned, and no one had come anywhere near. He hadn’t heard any activity or smelled any hint of recent human presence. He’d been so sure, he’d almost blundered out into the clearing around it—and then the noisy, smelly metal crate had roared up.

The auto, he thought it was called—his research hadn’t been terribly up-to-date—looked different from the spindly one he’d seen images of. When one of the panels on the side swung open and a man stepped out, well. Emikku had mixed emotions about that.

Now that he had a better view through the trees, he wished the man would turn his head to show his face hidden behind that thatch of curls. And like the wind and the wish were one and the same, a gust lifted the curls away.

“Oh!” He covered his mouth, the slip of sound causing his heart to race. He had to be careful. No one could know he was here. But oh! This was a pretty thing. Sun sank sweet, warm fingers into blond coils of hair and caressed high-boned cheeks it had already blessed with its touch many times over. Though his shoulders were broad, this human wasn’t so much bigger than what Emikku was used to at home. His eyes, though. They glowed gold as he tilted his head and the sun slid through them from the side.

“Oh my.” Emikku’s grasp on his magic slipped for a bare instant when his heart skipped. This was probably not a good thing.

Careful to make no sound, he backed deeper into the shadows cast by the broad leaves overhead. The pretty human’s lips curved down as he approached his dog. He said something Emikku would have had to draw on his magic again to hear, but masking his scent had been about as strenuous as he could manage.

The human gripped the collar around the dog’s neck and led him back over the bridge to the clearing around the house. The dog kept glancing back, though, his interest fixed on the spot where Emikku crouched.

It was time to go. 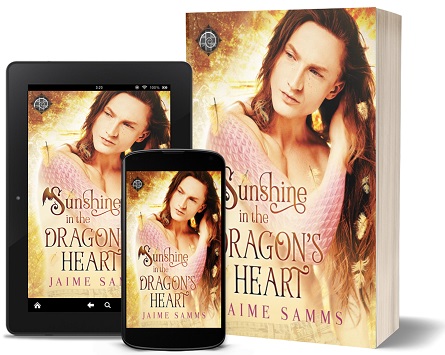 Spare time, when it can be found rolled into a ball at the back of the dryer or cavorting with the dust bunnies in the corners, is spent crocheting, drawing, gardening (weather permitting, of course, since she is Canadian!), or watching movies. She has a day job which she loves, and two kids, and thankfully, wonderful husband who shoulders more than his fair share.