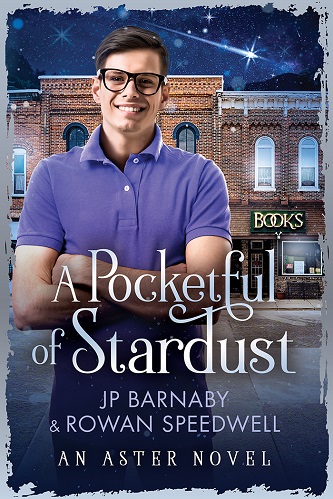 Title: A Pocketful of Stardust

Blurb: Noah Hitchens loves the New York City life he worked hard to build. But when his father dies and leaves him a bankrupt bookstore in their sleepy Georgia hometown, Noah knows he has to save it. Unfortunately, he doesn’t know anything about business. He finds unlikely help in Henry, the man who owned Stardust Books before his 1966 murder, and Kyle St. James, a shy but kind-hearted out-of-towner with a past almost as mysterious as Henry’s.

Kyle came to Aster, Georgia, looking for redemption. On the run and out of hope, he’s just trying to get on with his life. Then he meets Noah, a ghost, and a big sloppy lab named Jake who redefine his idea of living. But his past is closing in, and when it finds him, they could lose everything.

Review: Noah’s world collapses when he gets a call about his father’ death. Grief stricken he goes back home and tries to settle his father’s affairs. He finds out his dad was in debt and now he finds himself trying to come up with the money to pay off the debts.

He meets shy, sweet Kyle. But Kyle has been brought up in seclusion and taught that being gay is a sin. As the two slowly get to know one another they seem to bring out the best in each other despite their differences. I liked this story. it had several different aspects that appealed to me.

A past bully in Noah’s life tries to make trouble for him now, Kyle’s past comes back to haunt him and there’s a ghost in the book store. I loved the way the story unfolded as the scenes played out. They were entertaining to say the least.