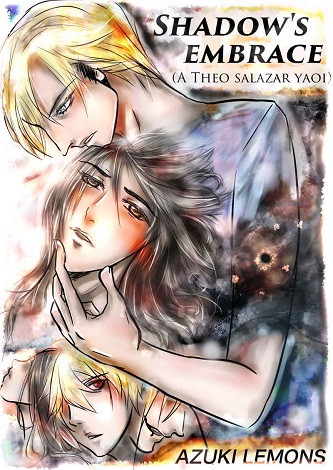 Blurb: New body. Four men. And a reputation so bad, even tabloids are tired of him.

Theo Salazar will never be the same again.

Shadowborn. Once known as a child embraced by the shadows themselves, he was the Dark Cult Clan’s greatest secret and their supreme sacrifice. He took them out from the face of the earth…before they came back to snatch him from the dead.

A man couldn’t even die in peace and now I have to cater to this arrogant CEO? That’s where I draw the line.

Oh. And kill a shit god.

Before he was put in the body of a scum actor named Theo Salazar, he was a mercenary – a laid-back freelancer who lived to die. It just so happened that he was also called Theo.

“Theo without a last name.” Cursed. Feared. A man covered in the ashes of a thousand enemies…and about to retire, umbrella drinks and all. That is, until he died and found himself on a hospital bed like part of some abandonment play. Gods.

He was supposed to be dead —
Only to wake up in another man’s body.

From runaway child vessel of shadow magic to the forever lovable bastard of a mercenary, he spent his whole life covered in blood. But just when he thought he could finally rest in peace…

He died for a bet – thrown carelessly into a new life and new problems. “Good luck,” the voice said.

The threads of his life kept getting tangled, past life and present.

Haunted by dreams of an angel, Theo could only hear her pleas to save somebody she wouldn’t name. And then there were them. Four men who prowled his nightmares and sought to chain him to their very souls.

Ever since he transmigrated to this new life, he found himself fighting more than he ever did on the battlefield.

Stuck in the body of an infamous “scum actor” known as Hollywood’s Creep, Theo had to survive not only god’s games, but also the actor’s enemies as well. Who also coincidentally shared the same first name as him. He was now…Theo Salazar the embarrassment of Hollywood.

Seriously. What exactly was he supposed to do over here?

Add fashion-crazed yakuza, fox-masked ninja with skills, and a lot of heavy dreams. To top it all off, the man who should have hated him the most? America’s Golden Child? Knew him in the most bizarre way.

Coincidence – or orchestrated by the gods? He wasn’t naive enough to believe in “fate”.

And why couldn’t a certain CEO just leave him alone? He’s not the only one.

Dealing with assassins under the moonlight was one thing.
Heated encounters with strange men was another.

“Demon king…” What? Said the guy sleeping at my front door.

“A company must make it’s full investment back.” Why won’t you let me rip up the contract?!

“You saved my life!” Then stop stalking me!

“If you ever need to talk…” Okay. Shit. Can’t say anything here. It’s like he stepped out of a painting.

Why didn’t he simply leave them alone…disappear…vanish into the shadows like he always did? What was it about them that made him stay as much as he wanted to leave?

Their twisted smiles loomed over me. “My angel.”

Review: I have to say this was one of the strangest yet entertaining books I’ve read so far. Theo is a complicated character at least it seemed to me he was. He has dark powers capable of killing men by the dozens. His own family wanted him dead so he dealt with them. But that’s not all assassination attempts are made repeatedly throughout.

Then there is the scene where he dies, which confused me greatly. How can you be killed by a dead man? I was lost at that scene. Afterwards Theo is thrust into countless dreamlike states where he sees individuals and gets glimpses of certain things. Then comes back to life in an actors body with the same name who everyone hates.

Whew it was a challenge grasping what was going on at times but what a wild ride it was. I loved the details and the imagery of the scenes. The things Theo does when put in a dangerous situation is mindblowing.

I enjoyed the story and looking forward to reading more about all the characters throughout.