Hi guys! We have Kai Tyler popping in today with her new release Bound to Liberty, we have a great excerpt so check out the post and enter the giveaway! ❤️ ~Pixie~ 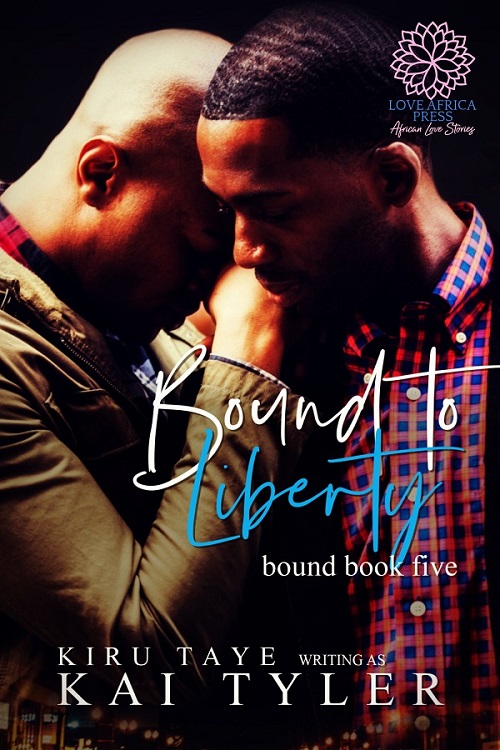 James isn’t ready to lose his heart again. Will Ethan fight for his love?

As if life isn’t tough enough for James Coker, rejected and nearly killed by family, he is also a closeted gay man in a country where being gay is outlawed. So when the first man he’s ever loved gets engaged to a woman, James’s solution to heartbreak is to indulge in a holiday fling.

In contrast, Ethan Eze has had life relatively easy. Born in the ‘Land of the Free’ and nurtured within a family where he can be whoever he wants to be, he’s a military veteran who is not afraid of going for what he wants. When he meets James, Ethan wants him.

Desire burns between them and soon blurs into devotion. But James is not ready to lose his heart again. Ethan has fought for his country. Now will he fight for love?

Bound to Liberty is a story about breaking free from mental chains and living a life of boundless love.
Content Warning: homophobia, threat of forced outing, depictions of anxiety.

END_OF_DOCUMENT_TOKEN_TO_BE_REPLACED

Zac doesn’t take no for an answer, and has set his sights on George’s slave Elliot as his newest conquest. Determined to see Elliot and bring him some holiday spirit, Zac starts a battle of wits with George. But will George be able to outsmart Zac, and keep him away from Elliot, for long?

In this novella, we get a closer glimpse of the pain and agony George and Jesse were going through when Jesse’s wife was insisting on keeping them separated. The emotions were off the charts and so hard to read. It made me physically ache for them.

Kennedy’s pain from finally losing Jesse was bought more to life here too. She actually finds comfort and a good friend in Zac, Jesse’s brother and I really think he’s what helps her start healing.

We also got a closer look at Zac. He is awesome! He has absolutely no filter and pretty much says and does what he wants (which right now, and hopefully permanently, is Elliott). I absolutely love him and Elliott together – they balance each other well and maybe Zac will get Elliott back to life and get him to live a little more and once and for all protect him from his awful father.

All this book did is wet my appetite for book 4! I want it right now!

Title: Breach of Contract
Series: Bound, #2
Author: J.R. Gray
Genre: Erotica/BDSM
Length: Novel (274 pages)
Publisher: Evernight Publishing (November 6th, 2014)
Heat Level: Explicit
Heart Rating: ♥♥♥♥4 Hearts
Blurb: With the legal trouble behind them, Daniel Caplin and Rafael Argon are ready to settle into a low-key D/s relationship, but life is unrelenting, when blackmail shatters their illusion of happily ever after. Pictures from one of the Rafael’s public scenes instill fear into his new submissive, Daniel, acting as a wedge driving the new couple apart.

The building peril in George’s community weighs heavy on his shoulders as he struggles to find the culprit—all while hiding his feelings for his new house guest. Jesse is torn between ending his marriage, picking up a rebound he should have left fifteen years in the past, and the dangling carrot of a possible relationship with a man. He is forced to fight for what he wants most, a leap he may be too chicken to take.

In the sequel to Legally Bound, George battles to take down an unknown enemy, while watching helplessly as those he cares for are broken beyond repair. Can Rafael and Daniel rebuild their trust after it’s broken with lies? Can George hold it together as Jesse is ripped from his life?

Product Link: http://www.evernightpublishing.com/breach-of-contract-by-j-r-gray/
Reviewer: Tina
Review: In the first book, I really didn’t like George until the very end. In this book, you get a much deeper dive into all things George. And I will say my mind has totally been changed and I am now a George fan. He and Jesse together are perfect. Jesse is the only person in these books that has been honest and has ‘stood up to him’. George loves that Jesse treats him as an equal. George really opens up to Jesse in this book and becomes vulnerable which makes him more human. Their love story has the potential to be life altering.

Elliott (one of George’s slaves) plays a bigger role in this book and there was a bit of foreshadowing for the future of this series I’m hoping.

(Jesse to Daniel) “Sounds like gibberish to me, please explain in my native tongue, not freaky speak.”

(Daniel) “What does asking nicely involve?” He shot Jesse a look. In his wildest imagination, he couldn’t imagine how the two of them were friends, or what the daunting king of the underground was like in private.
(Jesse) “I’m guessing me on my knees begging, but let’s be honest, I’m not above it. I’ve done worse for a bendy straw.”

These 2 really make this series for me. I still don’t really like Rafael. I thought maybe that would change once he and Daniel were free of the mess from book 1 but I still don’t. He doesn’t seem to be great guy and I think Daniel deserves someone who treats him better.

And of course, the ending leaves me not so patiently waiting for book 3, which has the potential to be the best of the series.