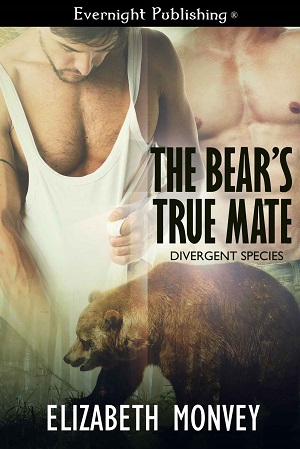 Blurb: Henry McBane had a wife. And a true mate. And they weren’t the same person. He once made a terrible mistake and it cost him everything. When he found his wife dead from a group of shifter hunters, he gets work as an enforcer to the Shifter Council in order to bring the hunting club down.

Ajay Orbin has been a prisoner for months, trapped with others as living science projects and held at the whim of a horrible scientist. When he’s finally rescued, he can’t believe it’s by the man he once loved with his whole heart.

Can he find it in himself to forgive Henry? And what happens when he finds himself…pregnant?

Review: This is not the first time I’ve read a book by Elizabeth Monvey. I’ve only read one or two other books and they had me a bit reluctant to go again because the writing style did not agree with me. However, I have to admit that this is the first time I really and truly connected with the characters and absolutely fell in love with her story.

Honestly, the story is something of a tried and true formula, and fans of that formula will not be disappointed by the story. I suppose in some ways it really does come under the banner of cheesy paranormal romance. But, hell, I’m a sucker for that and I ate it right up! The story starts with Ajay Orbin, who has been trapped by scientists in a lab; let’s call that tried and true #1. He’s a bear shifter who has met his mate, another bear shifter, Henry, tried and true #2. However, circumstances have kept them apart and hurt Ajay, namely the fact that Henry had a wife, tried and true #3. Henry is a bear shifter who goes around with a team to free shifters who are being experimented on, tried and true #4.  And that is where the M-preg stuff comes in, tried and true #5, and is of course something that is more niche in terms of tastes than everything else in this story. So, now our heroes are forced to be together again despite not all having the time to heal the rift that had formed between them – really, I would have liked a little more self flagellation (all mental!) on Henry’s side.

Look, despite my rating because I really did love this book, you can tell by my brief analysis there are plenty of holes in this story. Most glaring would be the rushed pace of story and character development. Part of me wanted to bring the rating down to 3.5 because I think with more words and time this could be a truly awesome book. It is something that you could expect from a Flynn Eire or Lynn Hagen type of story and without the detail of a Stormy Glenn book. But as it is, I loved the story, I loved the shifters, I love the M-preg stuff – all the elements were there to suck me into the world of Ajay and Henry and I enjoyed every second of it.