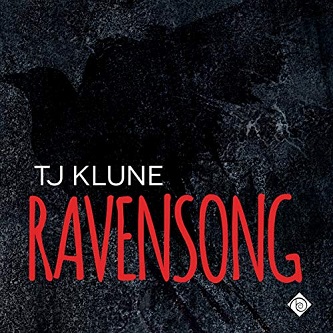 Blurb: Gordo Livingstone never forgot the lessons carved into his skin. Hardened by the betrayal of a pack who left him behind, he sought solace in the garage in his tiny mountain town, vowing nev-er again to involve himself in the affairs of wolves.

And it was, until the wolves came back, and with them, Mark Bennett. In the end, they faced the beast together as a pack…and won.

Review: Ravensong is the second book in TJ Klune’s Green Creek series, which is based upon the lives and current trials of the Bennett Wolf Pack of Green Creek, Oregon. If you’ve not read or heard the audio of the first book, Wolfsong, then it is vital to have gone through that intense journey before starting Ravensong. The events of this book pick up directly from book one, so I guarantee it will be confusing.

However, I highly recommend this series, especially to people new to TJ Klune. This is good for people that like a paranormal romance with shape shifters. It’s by no means a light read, it is intense and there is a good dose of angst. By the time you get to the end, your heart won’t be pieced back together after being torn apart, but there is so much more going on and we just need to wait for the next books as this series hits it’s halfway point.

Kirt Graves does a flawless performance narrating this book. He narrated the audio for Wolfsong as well. The way that man times pauses is an absolute art form. He really nailed the rollercoaster of emotions throughout the book.

While the story of the Green Creek Pack continues with their two alphas, Jo and Ox, we enter the very complicated lives of Gordo Livingstone and Mark Bennett.

Gordo is a man with a lot of baggage, a lot of fear and so much love and potential for love, it’s heart breaking. He also happens to be a witch. He father was once the witch for the Bennett Pack. As a child he saw his father transform into a dark witch, though, which tore apart the Bennett Pack and saw him become the pack witch at a very young age. Also at that young age he discovered that he was mate to one of those wolves – Mark Bennett, who is only a couple years older than Bennett although they were on the cusp of adulthood when this revelation occurred. But the Bennetts had to leave and Gordo felt that everyone in his life was abandoned. He remained in Green Creek where he became a mechanic, took over the shop and eventually led to when he appointed himself as the protector of Ox. Over the years the bitterness has consumed him, especially when he perceived danger when the Bennetts returned and it became apparent that his history could repeat with Ox.

Mark Bennett is a man with baggage when it concerns his mate. He has so much regret although he has never stopped loving Gordo. However, the danger that surrounds the pack in the form of Gordo’s evil father is working as a catalyst to bring the two men together. Mark instincts drive him to protect Gordo, despite Gordo’s feeling that Mark abandoned him.

The story goes between the past and “present”, as we get to know Mark and Gordo more. We get the events of Wolfsong from Gordo’s view (the chunk of time where Jo was absent from Ox’s life). With the evil plan of Gordo’s father, Richard Livingstone unfolding, I’m looking forward to find out how the Green Creek Pack fare. 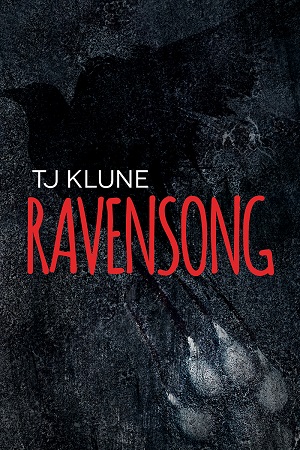 Blurb: Ox was 12 when his daddy taught him a very valuable lesson. He said that Ox wasn’t worth anything and people would never understand him. Then he left.

Ox was 16 when he met the boy on the road, the boy who talked and talked and talked. Ox found out later the boy hadn’t spoken in almost two years before that day, and that the boy belonged to a family who had moved into the house at the end of the lane.

Ox was 17 when he found out the boy’s secret, and it painted the world around him in colors of red and orange and violet.

Ox was 23 when murder came to town and tore a hole in his head and heart. The boy chased after the monster with revenge in his blood red eyes, leaving Ox behind to pick up the pieces.

It’s been three years since that fateful day and the boy is back. Except now he’s a man, and Ox can no longer ignore the song that howls between them.

Review: I think it’s safe to say that I adore anything by TJ Klune in any shape or form – or rather in any format. I love paranormal-shifter books and so when TJ Klune wrote this one, it was a must have. I mean, really, my two favorite things. What could go wrong? Reading TJ’s books is always a thrill and he is always guaranteed to make me laugh like a loon and then pull a “Wookie cry face” as I struggle to hold myself together and cry on public transport. Each and every TJ Klune book has a whole lot of a heart and Wolfsong is no exception.

With Wolfsong I originally read the epub version when it was first released. When I got the opportunity to hear the audio, I forgot basically the entire book except for knowing there was the usual TJ Klune wit, making me laugh and cry.

The story opens when we meet Ox at the age of 12. He is so sweet and once I fell in love with 12 year old Ox, I knew that I would love him as he got older. With an abusive alcoholic for a father, Ox doesn’t have an easy life but he just keeps on going, even after being abandoned at the age of 12. Ox struggles with his self esteem. Ox remains a quiet person but one day walking home from work he meets a very talkative and very energetic kid (his complete opposite), named Joe. But Joe has his own issues and Joe’s family welcomes Ox with open arms after helping Joe. As years pass Joe grows up and Ox remains to have a low self esteem. Also as the years pass we see Joe and Ox’s life and relationship become something that is nothing short of amazing. And Joe… Joe is just simply perfect for Ox.

Wolfsong was also my first experience Kirt Graves narrating and he is totally wonderful. When TJ said that the guy nailed the audition, he also nailed the book absolutely perfectly. He provided a brilliant voice to our main characters and just gave me all sorts of feels.

This is one beautiful, heartfelt ride into the lives of a wolf shape-shifter pack. There is so much packed into this. We got a guy who has been abused and trying to make a life for himself – and manages to surround himself with wonderful people in the process introducing love and family into his life. Ox is just so damn sweet and lovable that I wanted to wrap him up in a blanket and cuddle him close. The sequel is out in 2018 and I can’t wait!