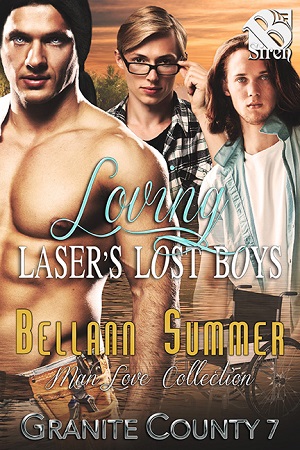 Blurb: Helping out friends, Laser went in search of hard partying Holt McCoy and Daniel Powel. His mission turned personal when he saw the two sharing a scorching kiss. Taking them home was easy. Keeping them turned out to be another matter entirely.

Holt used drugs and alcohol to forget the agony of watching his beloved mother lose her battle with leukemia. But no matter how hard he tries to find love, in the end he’s alone. After being kidnapped and tortured, Daniel had two options: feel sorry for himself for being stuck in a wheelchair or go out and have fun. His choice had his mind floating out of his body to the hard beat of music. His soul found its other half in Holt. Then, Laser came along and proved he needed a third.

It was too bad Daniel and Holt couldn’t get this relationship thing right and kept getting lost. But they needn’t have worried. Big, bossy Laser always found them.

Review: Each book in the Granite County collection features a new romantic couple. To enjoy the overall story arc and crossover characters, I would recommend reading the series in sequential order.

Bellann Summers has been one of my favorite authors for sometime. Ever since she started writing her Rescue for Hire series. I started reading romance stories at the age of twelve and it wasn’t until a few years ago that I started reading male on male romance stories. I love how the stories gives you not only action and suspense, but a bit of a mystery. The worlds that this author creates is intriguing, refresh, solid and just a damn good read. They always catch my attention from the moment I start reading and keep it all the way to the end. I always know when one of her stories come out that I am going to enjoy the read.

Laser decided to help his friends out. One was to look for a guy who didn’t show up for work and everyone was worried. The other one was the brother of one of his teammates. It was just to locate and possibly bring back. That all changed the moment he sat eyes on the two sexy men. Both were in their own little hell and he wanted to bring them out of it.

Daniel was in so much pain and filled with hate over his situation, where as Holt was missing his mother something fierce. He was lonely and hooked up with Daniel. Now here was a very sexy ex-mercenary looking at them like they were the prime course. To bad keeping them both out of trouble is well difficult. If you want to know more, then read the book.

I have enjoyed reading this book and can not wait for the next book to come out. I can honestly say that if she ever stopped writing them I would probably have a melt down. I can’t even imagine having a favorite character out of her series, they are all so damn fascinating. Each story sends me into a new and wonderful journey that I look forward to with each story. I can guarantee that you will love this story as well.

Corey returns to his on again, off again boyfriend, after hearing Kris has been attacked. This time he isn’t given a warm welcome. Instead his selfish wants may have damaged the relationship beyond repair.

Kris is never enough for his boyfriends. He tries, but the last one thanked him by taking a knife to him. When Corey returns, trust is gone and frustration abounds.

Meeting Kris and Corey has made Storm’s life complete. He’s more than willing to help them progress to forgiving each other and growing into a solid unit with him. But a firebug’s in town. Kris suspects it’s one of Corey’s exes, but the signs point elsewhere. As the three burn up the sheets, someone’s burning up the city.

And of course Ralph’s watching everything.

Review: Each book in the Granite County collection features a different romantic couple. To enjoy the overall story arc and crossover characters, I would recommend reading the series in sequential order. I love the way Bellann can put together a book that not only fascinates you but draws you in. I had a blast reading this and look forward to reading more by one of my favorite authors.

I came across Bellann’s books about a year ago and I was fascinated with the world she brought out and the characters. It didn’t take long before she became one of my top five favorite authors and I automatically buy her books. This story was no different and the bunny made it even better.

Kris had been kidnapped and tortured by an evil sadistic asshat. As he was in the hospital healing, Corey came home. Kris had been hurt when Corey had left him, never understanding why he needed to. Now he was back and Kris was terrified.

Corey had always needed something that Kris alone could not give him. He however knew that he loved Kris. So when he found out what had happened to Kris, he came running back. The problem was, Kris was pissed at him. Things were not going to get better that is for sure. Doing a delivery for Kris, ends up with Corey in danger and Storm saving his ass.

Storm had at one time been in the military, and then became a mercenary with his friends. He was damn good at it, but they all had known it was time to retire. Now he had come to Granite to watch a friend get married. He might have found a town which would be perfect for him. When he saved Corey from dying in a fire and meeting Kris he knew he was staying for good.

However he had not expected the stubborn little brats to fight all the time. It was time for a strong Dominate to put a hand to their ass that is for sure. To top it off someone seemed to want him and Corey to die. He had to keep his men safe and also to show them that they were loved.

I had a blast reading this story. It caught my attention from the moment I started reading and kept it all the way to the end. It also gave me everything I could want in a book. I mean what is better than two gorgeous men. Well in this book you get three sexy ones with hot sex, tender loving and some feisty arguments.

I can’t wait to read the next story.

Title: Controlling His Men
Series: Granite County, #2
Author: Bellann Summer
Genre: Ménage a Trois/ Romantic Suspense
Length: Novella (117 Pages)
Publisher: Siren Publishing (January 9, 2015)
Heat Level: Explicit
Heart Rating: ♥♥♥♥♥5
Blurb: After a tough week, including both of them getting dumped, Department of Criminal Justice agent Dean Titan and Granite County Chief Deputy Creed Darnley blew off some steam with sex that turned into a relationship. Things are good, yet not exactly great, and then they are kidnapped.

Before Granite County Medical Examiner Job Nicolson could come to terms with his fears of kinky dominating sex, Dean took up with fascinating Creed. When he heard about them being kidnapped and hurt, he heads to the hospital to take a chance and care for both of them.

For care to turn into love for these three, Dean and Creed have to first recover from the extreme torture they endured, and let Job into their hearts. Not to mention gun-welding assassins, stalkers, an election, and finding a place to live that accommodates all their jobs.

ISBN: 978-1-63258-765-7
Product Link: http://www.bookstrand.com/controlling-his-men
Reviewer: Lisa
Review: This is part of the Granite County series and they need to be read in order. Each story is about a new romantic couple.

The only thing better than two men in love is three men in love. Talk about a hot and tempting story. Bellann has an amazing way of giving you a story that will have you sitting on the edge of your seat, biting your lip, bouncing and turned the hell on. I love the way you can just feel the heat and love that these men have for each other.

Job wanted to be with Dean. However, he had fears of the control, bondage, and sexual desires that the sexy man wants from him. He feared what his family would say if they found out. He knew when he told Dean off and said some nasty stuff to him that he would have to kiss ass. He also knew that Dean had turned to Creed afterwards. He was also turned the hell on by Creed. Now his mind was definitely reeling from it all.

Dean was hurt by Job’s words and when he needed someone to comfort him, he turned to Creed. He found himself falling for the gorgeous man, but missed Job. Then after a night of hot sex Creed and Dean found themselves captured and tortured. When he woke up after they were rescued, he found Job tending to them. He wasn’t too sure what was to happen, but when Job told them both that he wanted what Dean had suggested and that he also wanted Creed they had many things to talk about.

Now all they have to do is to capture the ones that wanted them dead and keep each other safe. It has more of a serious tone to it, but there is just a hint of humor in it. The sex between them is spicy, kinky, possessive, and extremely hot. This series is actually branched off of Rescue For Hire series. I would suggest starting with that series. It will tell you more about each character that will appear in each story and keep you from getting confused or frustrated. And let me tell you that each story is just as hot as the others.

I had a blast reading this amazing story and look forward to reading many more books by this author. It is a fascinating story that will have you wanting to hear more. You can tell when an author puts her heart into what she is writing and this is one of them. The amount of danger that these men go through has your breath catching and hoping for the best. It gave me all that I could possibly want in a story and so much more. It caught my attention from the moment I started reading and kept it all the way to the end.

In fact when it comes to Bellann’s books I am always sitting on the edge of my seat waiting for the next one to come out. Anticipation is part of my book world it would seem.