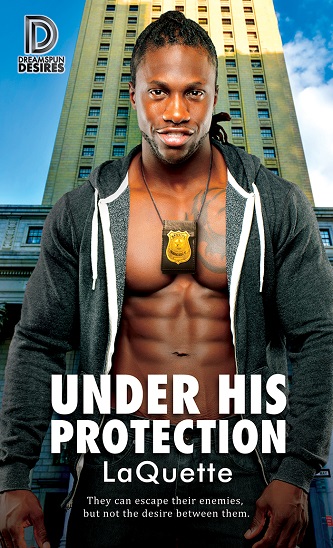 Title: Under His Protection

Blurb: They can escape their enemies, but not the desire between them.

Prosecutor Camden Warren is on the fast track to professional nirvana. With his charm, his sharp legal mind, and his father as chief judge in the highest court in NY, he can’t fail. Nothing can derail his rise to the top… until an attempt on his life forces him to accept the help of a man he walked out on five years ago.

Wounded in the line of duty, Lieutenant Elijah Stephenson wants to ride his new desk job until retirement—not take a glorified babysitting gig with more risk than it’s worth… especially not protecting the entitled lawyer who disappeared after the best sex of their lives.

The threat against Camden’s life is real, but their passion for each other might prove the greatest danger they’ve yet to face.

Review: Under His Protection is a novel by LaQuette published as part of the Dreamspun Desires line. I hadn’t known what to expect because I haven’t heard of the author.

Alright, this is going to sound completely crazy. So many authors publish under assumed names for some crazy reason single name pseudonyms make me weary. I know it ridiculous, but I think after a number of bad book experiences I had to force myself into this. However, I thoroughly enjoyed Under His Protection – I honestly thought I would based on the blurb, I just had to get over this one mental hurdle.

I find the themes, including interracial relationships, really strong in this book. I love how it shows that love doesn’t know any of the barriers that society and culture have previously put up, including barriers towards homosexual relationships. I really loved this aspect of the book. Although I always have trouble with swallowing the whole trust fund kids who have zero control over their lives and careers because of overzealous and manipulative parents, I found this really complemented the whole thing.

The story is about Lieutenant Elijah Stone of the NYPD and is the black cop who comes from a well-rounded, pretty much awesome blue-collar family. I rarely mention covers but the cover model that represents Eli is completely mesmerising. Five years ago, he thought that he had found a man that he could fall in love with, but he ran scared and so Eli has focused on his career ever since. He has now made it the rank of Lieutenant, although just before he could take his new assignment, he was badly injured in the line duty, having left him in a coma and hanging onto life. Returning to work means that he is given one more assignment to take before taking up his new post, he has to protect the man that almost had the chance to break his heart.

Camden Warren, assistant district attorney and is living the life and political aspirations that his father has mapped since the time Camden was born. Despite having been forced into his career, Cam does enjoy his job but he has come to resent that he can’t live his own life, especially when being in such close proximity to Eli means that it’s so damn easy for him to let his defences down. A death threat and a car bomb from a crazy cult has sent Eli back into his life five years after they had been set up on a blind date by a mutual friend, the district attorney. Eli has a plan to keep Cam out of the way, hidden at Eli’s own family home, where the men are now in a situation where they need to communicate and actually understand each other. Communication is vital to the story because it is clear that between their individual brushes with death, these guys are made for each other but Cam needs to figure out how to deal with his manipulative father.

In the end, this is a story of love conquers all. I think the interracial aspect will appeal to many, although I can’t say I ever really picture race when it comes to reading unless pointed out to me in the way that I don’t think it matters what the colour of another person’s skin is, I think bringing to the forefront of a book is necessary. However, mostly people that love second chance at love and the action/suspense/intensity that comes from a cop who will do anything to protect the man he loves, will certainly love this book.