Hi guys! We have R.R. Campbell stopping by today with his new release Mourning Dove, we have a great excerpt and a brilliant $10 NineStar GC giveaway so check out the post and enter the giveaway! ❤ ~Pixie~ 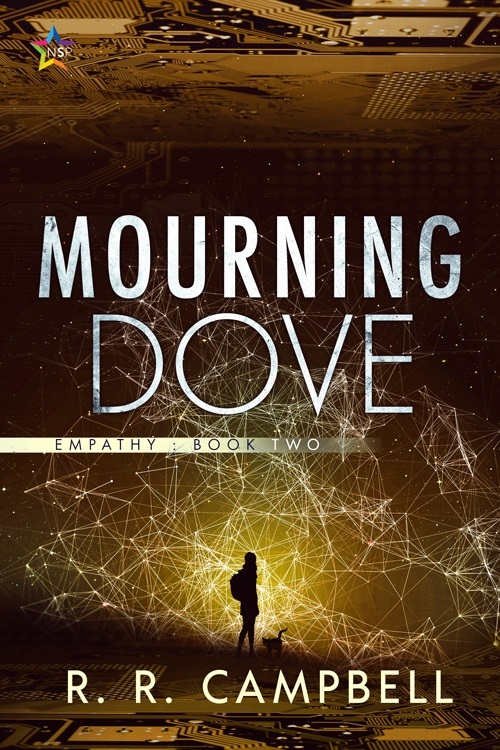 In the aftermath of the calamitous Human/Etech research study, Chandra and Kyra struggle to reclaim the life they shared in a pre-EMPATHY world, while Ty, armed with knowledge of EMPATHY’s programming language, seeks revenge on the Halmans for the harm that’s befallen his friends.

As a North American Union investigation into the happenings on the compound looms, a grief-stricken Peter works to resurrect the memory of his mother from a harvested nanochip, and Heather scrambles to keep her family—and their company—together. Alistair, having abandoned the family business, plots to save his hide and that of his wife while she strives to stay one step ahead of a husband she has no reason to trust.

Far to the north amid civil unrest, a recently retired Rénald Dupont investigates the disappearance of his friend and former colleague, Meredith, despite grave threats from an increasingly skittish North American Union government.

As old and new foes emerge, spouse is further pit against spouse, brother against sister, and governments against their people. In the end, all must choose between attempts to reclaim the past or surrender to the inevitable, an intractable world of their own creation.

Mourning Dove is an evocative, sweeping symphony of love, revenge, and desperation in cacophonous times. It is the second installment in r. r. campbell’s epic EMPATHY sci-fi saga.

END_OF_DOCUMENT_TOKEN_TO_BE_REPLACED

Hi guys! We have R.R. Campbell stopping by today with his debut sci-fi lesbian release Imminent Dawn, we have a great excerpt and a brilliant giveaway so check out the post and enter the $10 NineStar GC giveaway! ❤ ~Pixie~ Art-school dropout Chandra would do anything to apologize for her role in her wife’s coma—including enroll in the first round of human trials for an internet-access brain implant.

At first, the secretive research compound is paradise, the perfect place to distract Chandra from her grief. But as she soon learns, the facility is more prison than resort, with its doctors, support staff, and her fellow patients all bent on hatching plots of their own, no matter how invested they might seem in helping her communicate with her wife.

Making matters worse, a dark wave of uncertainty crashes down on the compound, forcing Chandra to become an unlikely but pivotal player in conspiracies stretching from the highest levels of the North American Union government to the lowest dredges of its shadowy hacking collectives.

To save herself and her wife, Chandra and her newfound friends from the study will have to overcome the scheming of a ruthless tech magnate, the naïveté of an advancement-hungry administrative assistant, and the relentless pursuits of an investigative journalist, all of whom are determined to outpace the others in their own quests to resurrect lost love, cover their tracks, and uncover the truth.

A twistedly delightful clockwork of intrigue and suspense, Imminent Dawn is an electrifying sci-fi debut from author r. r. campbell.