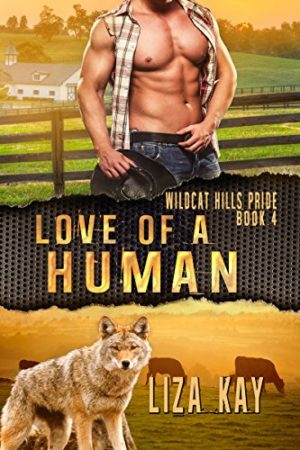 Title: Love of a Human

Blurb: Alpha Donavan Haas has a secret. Something he’d die before admitting to. To his coyote pack, he is stubborn, masculine, and dominant, but his inner self longs to be free. He’s living in a gilded cage, but who holds the key?

London Fishman is a quirky human nurse who’s read far too many shifter romance novels. Being kidnapped by Xander’s pride only reinforces his belief in the existence of the paranormal. London yearns for a mate of his own. And then he meets Donavan, and all his dreams have come true.

But happily ever afters are sometimes hard to come by. Don’s sins of omission become a barrier between them, and his actions remind London too much of past lovers who have hurt him.

True strength lies not in dominance, but in knowing who you are. If Donavan doesn’t figure that out, and tell London the truth, he just may lose him.

Review: Each book in the Wildcat Hills Pride collection features a new romantic couple. To enjoy the overall story arc and crossover characters, I would recommend reading the series in sequential order.

Wow a sexy alpha who is definitely going to get luck from now on. This is one of those stories that should be read back to back. It has been awhile since I read the first book so I missed our guys first meeting. But Donavan has met his mate, a mate that is definitely more dominant then our alpha, plus he is quite a bit bigger. But he has a secret, a secret that he things will make him weak.

London was a fantastic nurse at a hospital till his mother got him fired. Then he went to work somewhere else, gets abducted and ends up surrounded by shifters. However he is a very quirky human, a human that wants to be a mate to a shifter. He is about to get his wish, that is as soon as he figures out what is with Donavan. Things are going to heat up real fast, that is after they get rid of the danger coming at them.

I haven’t had the chance to read many books by this author, and I can say that that will be fixed. There is danger, excitement, adventure, some hot and kinky sex and just a bit more to this story. It caught my attention from the moment I started reading and kept it all the way to the end. I was fascinated by the world this author created, you don’t find many coyote shifters, and if you do they are usually the bad guys.

Now with Donavan, I wasn’t to sure of him because his attitude that came off was of total asshat. However after watching and listening to him, oh and finding out his hidden secret, I could see why. To top it off his mother was one major bitch, and he needs someone to love him. I enjoyed reading this book and I can not wait to get my hands on the next story.

This is one book I would definitely recommend.

Blurb: When the woman you’ve been waiting for all your life turns out to be a man, will you be brave enough to open your heart for the possibility of love?

Viggo Cavanaugh leads an easy life. The European wildcat shifter loves his work as a climbing coach and travel guide, and he’s looking forward to meeting his mate and raising a passel of kittens with her. His life spins out of control when he returns home from a business trip to find his mate already waiting for him. His male mate.

Jaxon’s life has been in upheaval since he’s defied his Alpha and risked his life to rescue a shifter held captive by his herd. Luckily, the deer shifter has found shelter with a pride of cats. Jaxon is overjoyed when he scents his mate in Beta Alan’s home, even if his mate’s gender takes him by surprise.

Too bad Jaxon’s past soon catches up with him. His ex-Alpha kidnaps Xander, the Wildcat Hills Pride’s leader, in order to get his hands on Jaxon.

Between rescue missions, new friends, a dubious ambassador for the shifter Council, and Viggo’s erratic behavior, Jaxon wonders if he and Viggo will ever have a chance at a relationship.

Review: Each book in the Wildcat Hills Pride collection features a different romantic couple. To enjoy the overall story arc and crossover characters, I would recommend reading the series in sequential order. But, it is by no means necessary.

Viggo has always wanted a mate, but he had never expected his mate to be a guy. He is having a difficult time getting over the fact that Jaxon was his mate. So imagine his surprise when he got home from work to find out. To top it top it off Jaxon’s herd wanted him back, so they kidnapped Viggo’s Alpha to get it done.

Jaxon was pretty much the same as Viggo, except he had a bit more time to get use to the idea. He also wanted Viggo no matter what. And his damn ex-Alpha kidnaps Xander to get him back. They both will protect each other with everything in them, now if only they could get to the claiming.

I absolutely adored the crazy nurse that refuses to go home. This story was a blast and I had so much fun reading it.  I think Liza Kay is going to be a new favorite author for me.

Blurb: When you lose your fated mate, will you be brave enough to accept a second chance?

Persian cat shifter Thony Cavanaugh has been in love with his best friend, Alan Abramowitz, for three years. Although Thony and Alan are fated mates, only Thony seems to feel the bond between them. Afraid of getting rejected by the strong beta, Thony doesn’t have the guts to confront Alan with his feelings. But everyone has a breaking point.

Alan reached that point sixteen years earlier, when he met his mate, the biker Jon, only to lose him to a terrible accident. Jon’s death almost killed Alan, and it left his heart battered and bruised. Oblivious to the connection he shares with Thony, and suppressing his feelings for the Persian cat to keep his heart intact, Alan spends his life working as beta and accountant for Alpha Xander. After all, shifters don’t get a second chance. Or so he thinks.

Then a fight between the two friends gets out of hand. Thony pushes Alan away, demanding they take a break from each other. And suddenly, Alan realizes that losing Thony could break his heart for good.

If you like fickle cats and enjoy stubborn men who have to fight for their happiness, don’t miss this shifter romance!

Review: I loved the way this author can put together a book that not only fascinates you, but draws you in. I had a blast reading this and look forward to reading more by this amazing author.

When Alan had been eighteen he had found and lost his mate in one night. Fear and anger overtook him to the point that he lost his feelings in one night stands. He had left his home to heal and it leads him to a new life. He had the hots for Thony, but feared he would lose him when Thony had found his mate. So when he was asked for something more, he turned him down not knowing that they were mates.

Thony had known from the start Alan was his mate, but he never said a word feeling that Alan had known. For a couple of years he sits in the background with his heart being shredded, not knowing that Alan had no clue. Miscommunication between these two is a major problem.

It isn’t until Thony was distancing himself that Alan realized he had to take a chance. I bet once he figures it out he will be smacking himself upside the head.

I always did love a good romance that didn’t have the couple falling in love right from the start. I loved how they had to make it work.  It was the perfect story for me and I loved it.

I can’t wait to read the next story.

Pitney Winters is sure he’ll never find a proper boyfriend. He owns a mirror and knows he’s neither a handsome stud nor a cute twink. When an ex ****-buddy visits Pitney at work, a handsome man interrupts their argument and saves Pitney’s skinny ass. Pitney can’t believe his luck when the epitome of hunky maleness asks him out on a date.

Rafael Bell has ogled Pitney before while eating at the restaurant where the lad works. Smitten with the younger man, Rafael carefully woos the shy guy in the weeks leading to Christmas. He longs to win Pitney’s trust and love and to convince him that he’s worthy to be loved despite his hang-ups.

Pitney, who’s still in the closet, realizes that he needs to trust not only Rafael, but his family as well, if he wants a Merry Christmas.
If you love a big alpha male with a sexy secret, a not-so-perfect hero struggling through life, and gingerbread men, don’t miss this sweet Christmas Story.

Review: Each book in the Sweet Snacks collection features a different romantic couple. They can however be read as a standalone.

Pitney is a shy young man who self-esteem is very low. His one relationship, which wasn’t a real relationship, left him a bit scared. So when Rafe saves him from his ex he is blown away. He had been staring at this gorgeous man since he started coming to the restaurant. Not only that but it looks like Rafe is way interested in him. So things are about to heat up.

This is the first story by Liza that I have read and I have to tell you that I will be reading more of her stories. There is just something about them that calls to you and has you spell bound. Each man has issues it seems with their sexuality but together they are determined to be together.

This is a short and very sweet little love story that I had a lot of fun reading. I would love to hear more about them in the future. The story line was perfect and the characters were well written and fully developed.

This was a blast and I would definitely recommend it.