Hiya guys! We have Rhys Ford visiting today with the tour for her new release Silk Dragon Salsa, we have a brilliant guest post from Rhys, we also have Part 6 of Finding His Place, A Kai Gracen short story , we have an amazing $20 GC giveaway and my review, so check out the post and enter the giveaway ❤️ ~Pixie~ 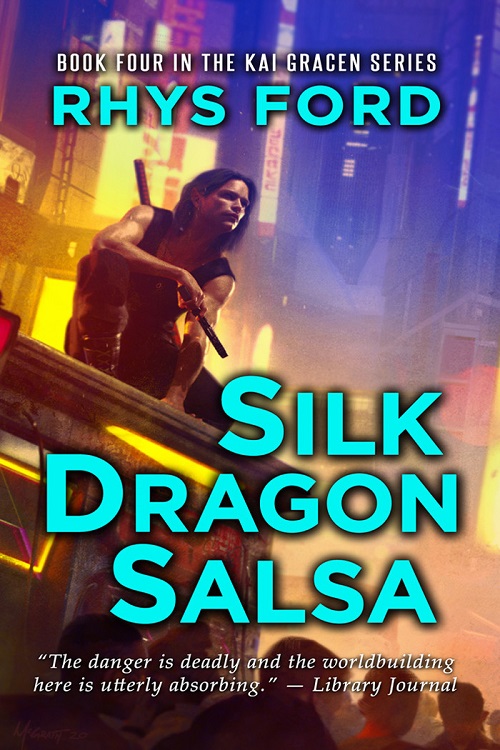 SoCalGov Stalker Kai Gracen always knew Death walked in his shadow. Enough people told him that, including his human mentor, Dempsey. Problem was, the old man never told him what to do when Death eventually caught up.

Where Tanic, his elfin father and the Wild Hunt Master of the Unsidhe Court, brought Kai pain and suffering, Dempsey gave him focus and a will to live… at least until everything unraveled. Now caught in a web of old lies and half-truths, Kai is torn between the human and elfin worlds, unsure of who he is anymore. Left with a hollowness he can’t fill, Kai aches to find solace in the one elfin he trusts—a Sidhe Lord named Ryder—but he has unfinished business with Dempsey’s estranged brother, a man who long ago swore off anything to do with the feral elfin child Dempsey dragged up from the gutter.

Reeling from past betrayals, Kai searches for Dempsey’s brother, hoping to do right by the man who saved him while trying to keep ahead of the death haunting his every step. Kai never thought he’d find love or happiness as a Stalker, but when Death comes knocking at his door, Kai discovers a fierce need to live life to the fullest—even if that means turning his back on the people he calls family.

END_OF_DOCUMENT_TOKEN_TO_BE_REPLACED

Hey guys! We have the amazing Rhys Ford and the blog tour for her upcoming release (tomorrow! tomorrow!) Mad Lizard Mambo (yessss Kai’s back!), we have a short intro from Rhys, part 2 of When Kai Discovers He Does Not Bounce, and an awesome giveaway! So peeps, check out the post and leave a comment to enter the giveaway! <3 ~Pixie~

Kai Gracen has no intention of being anyone’s pawn. A pity Fate and SoCalGov have a different opinion on the matter.

Licensed Stalkers make their living hunting down monsters and dangerous criminals… and their lives are usually brief, brutal, and thankless. Despite being elfin and cursed with a nearly immortal lifespan, Kai didn’t expect to be any different. Then Ryder, the High Lord of the Southern Rise Court, arrived in San Diego, Kai’s not-so-mundane life went from mild mayhem to full-throttle chaos.

Now an official liaison between the growing Sidhe Court and the human populace, Kai is at Ryder’s beck and call for anything a High Lord might need a Stalker to do. Unfortunately for Kai, this means chasing down a flimsy rumor about an ancient lost Court somewhere in the Nevada desert—a court with powerful magics that might save Ryder—and Kai’s—people from becoming a bloody memory in their Merged world’s violent history.

The race for the elfin people’s salvation opens unwelcome windows into Kai’s murky past, and it could also slam the door on any future he might have with his own kind and Ryder.