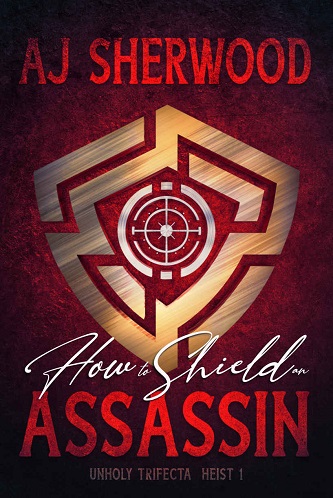 Title: How To Shield an Assassin

Blurb: It’s not stealing if you’re stealing it back….

Ari had a game plan for life. Shoot people. Get money. Hang out with fellow criminal friends. He saw absolutely no reason to change that plan until one dark night in Memphis, when a little girl reached out to him with pocket change and a desperate plea for him to help her.

Adopting an abused little girl off the streets was, needless to say, not part of the plan. Ari had no idea what he was doing with an eight year old. He especially didn’t know how to juggle taking contracts and raising a little girl.

Things get more complicated when the mercenary, Carter Harrison, approaches him with a job. He needs Ari’s expertise to get into the very high-security museum, Knowles, and steal back Monet’s Water Lily Pond. The job isn’t an easy one. He’d need more than the two of them to make it happen. It’s further complicated because Ari’s not sure what to do with his new daughter while working this job.

And for that matter, how’s he supposed to handle the sexy mercenary?

Review: Ari and his twin, Luca, were orphaned and sent into the foster care system. One came out a lawyer and well Ari is the assassin. He was damn good at his job and with the help of his two friends, he was even better. There was one basic rule that he followed and it was no harm came to kids. So when a little girl came to him for help, lets just say he now has a daughter. One that might just beat them all.

Carter is in some need. He is hired to steal back a painting from one of the high security museums. He is hired by an unknown to get a stolen painting from a private museum and return it to another. He could go in and get a kid back but this one was a little harder to work. He liked working with a team and it looked like he might have found a good one.

No one would take a job by an unknown even for a big payday. That would say that he is not as sure of his job or his life if he did. Also who goes to check up on an assassin where their kid is without getting the heads blown off.

Remi is unlike any kid I know and comes off not so positive in this story. While the idea of an assassin adopting some random kid just because he felt bad for her is a bit strange, it was still a good add into the story. However the fact that she doesn’t act like she really should is the problem. Just because someone helps you doesn’t mean you automatically trust them. Also the characters don’t act like assassins, mercs, thieves and hackers. Once in an assignment you don’t change it, yet they rushed a job that was supposedly not able to do. It just came off wrong. You get the mention of Luca, the meeting between them all set up but then it stops. You don’t get to see it through.

Then there is the security they are going through, and lets face it, it just doesn’t pan out. Now on the flip side of the coin, the story is still pretty entertaining. I might have griped about the characters but lets face it they still were a big hit with me. I like the way they interacted with each other. It is a slow burning romance and for once it worked out all right with this story. I am not a fan of the dual voices in the story, but I think the part that drove me nuts is the author put their name ahead to know who was talking, but lets face it it was easy to figure it out right off the bat.

Over all I really liked the story and can’t wait to see what the next book has going on.