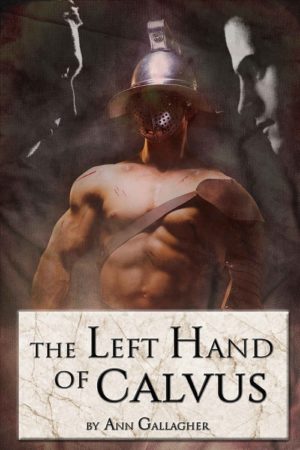 Title: The Left Hand of Calvus

Blurb: Former gladiator Saevius is certain Fortune’s smiling on him when a Pompeiian politician buys him to be his bodyguard. That is until his new master, Laurea Calvus, orders Saevius to discover the gladiator with whom his wife is having a sordid affair. In order to do that, Saevius must return to the arena, training alongside the very men on whom he’s spying. Worse, he’s now under the command of Drusus, a notoriously cruel—and yet strangely intriguing—lanista.

But Saevius’s ruse is the least of his worries. There’s more to the affair than a wife humiliating her prominent husband, and now Saevius is part of a dangerous game between dangerous men. He isn’t the only gladiator out to expose the Lady Verina’s transgressions, and her husband wants more than just the guilty man’s name.

When Saevius learns the truth about the affair, he’s left with no choice but to betray a master: one he’s come to fear, one he’s come to respect, and either of whom could have him killed without repercussion.

For the first time in his life, the most dangerous place for this gladiator isn’t the arena.

This 52,500 word novel was previously published under the pseudonym L.A. Witt, and has been lightly revised.

Review: Just three fights short of his freedom Saevius is bought by a Pompeiian politician, although his chance of freedom is gone Saevius is just glad that the life as a gladiator is behind him, that is until his new master orders him back to the arena to search out the man his wife is having an affair with. Discovering that man’s name is hard which is made even harder but the eagle eyes of his new Ianista Drusus, a man whose name is well known by gladiators around the country, a man who is spoken about with fear and hate.

This is a very well-crafted story; it pulls you in quickly as we see everything through Saevius’ eyes. Saevius has lived his life as a gladiator and is looking forward to never fighting again when he is sold to Laurea Calvus and thrown right back into the life he hoped he’d never see again. He finds himself in a situation he never thought he could possibly be in, torn between his master Calvus, his new Ianista and his fellow gladiators.

I liked this story a lot, especially about the everyday life of the gladiators, seeing through a gladiator’s eyes and having his thoughts and feelings about everything was fascinating and really does pull you in. I wasn’t sure about this story when I first picked it up, I’m not into first person narrative but this really was an interesting read. I will admit that at times I did wish we could see things from Drusus’ perspective especially after we discover the truth because that would be just awesome, the story from Drusus’s view would be a must read.

We get pulled into a world filled with intrigue, danger and just a dash of mystery, Saevius really does find himself with an impossible task, spy for his master, spy for his Ianista, keeping his fellow gladiators off his back, lying to his master, his Ianista and fellow gladiators, facing punishment from all three… damn Saevius just can’t do anything right with being hemmed in on three sides and with his back to a wall full of spikes!

I do feel that the story did gloss over Saevius feelings, because I’ll tell you if I had a glimpse of freedom and it was snatched away at the last moment I’d be storming mad and spitting feathers while railing at the Gods sick twisted humor. I also think the author took a couple of liberties with the way that women and gladiators interacted, because while it may have happened it happened in secret where no one could see and many mouths were firmly shut on pain of death.

I recommend this to those who love ancient Rome, Gladiators, intrigue, danger, a hint of romance and an ending that is definitely happy for our earnest while gladiator.