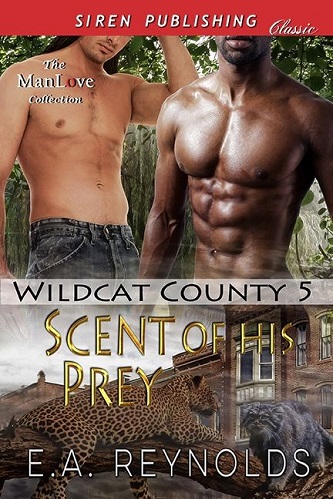 Title: Scent of His Prey

Blurb: Austen is content with his life even though he has no man to speak of and his sister is the most company he’s been keeping lately. Then, a sexy stranger stops him on the street to ask him out. Hesitant, Austen turns Kieron down, deciding to err on the side of caution. The first time Kieron saw Austen, he was curious as to why a hired killer would be following him. One look and Kieron is smitten. His cat becomes determined to do two things. One, claim Austen for its own and two, protect him from the other dangers stalking him at all costs. And as that danger gets closer, Austen loses his heart to Kieron against his better judgement. However, falling in love has never been more romantic or risky, but it’s too late to stop, not that he can hide from Kieron anyway. Once a hunter has the scent of his prey, nothing can alter his course.

Review: Each book in the Wildcat County collection features a different romantic couple. To enjoy the overall story arc and crossover characters, I would recommend reading the series in sequential order.

Things are out of control for Austen. He loves his little sister something fierce, but the rest of the family could drop dead. His boss wants him to take over the shop but he has some conditions that Austen doesn’t like. Then a sexy cat ask him out, and he just wasn’t sure he wanted to try. His last mate left him and hooked up with a female. He just wasn’t to sure about love.

Kieron was working for the good guys while undercover with the bad guys. He has been given instructions on what to do, but a sexy feline has him tied into knots. Then he finds out that Austen’s family just might be involved. He was a hired killer for Logan, but he knows he will protect his mate. That is if he can get his mate to behave.

With this story you definitely have to read the previous books. The characters are so hard to follow and even though they are fighting for good, you just can’t tell. This story was actually a bit easier to follow but still ended up giving me a damn headache. I was glad for the ending and happy to see them together. The writing is well done and the story top rated, but like I said it is a bit confusing. It jumps from one spot to the next.

I can honestly say that I am on the line with this book. I don’t know if I like it or not. It has a darkness to it that I don’t really care for and very little humor to make up for it. I hate to admit that I might just give up on this series, since I have difficulties following it. Oh well we will see what the next one looks like. 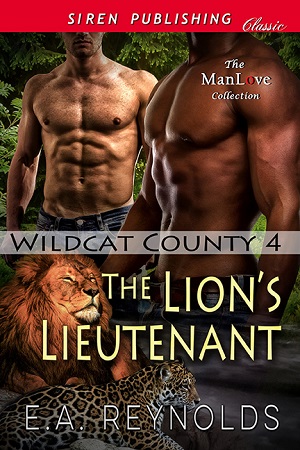 Blurb: Landyn isn’t looking for a lover let alone a mate. He’s just trying to adjust to life in a new pride where his rank has been taken and he’s forced to earn the respect of strangers. Although he’s lonely and his cat has a craving for a certain sexy lion, he’s not going near Emil.
Emil knows Landyn is a man he needs in his life, but Landyn is so deep in the closet he won’t even accept a date from him. But he has no intentions of taking no for an answer.

When a chance meeting leads to a walk in the park, Landyn accidental marks Emil and the lion is more than up to the challenge of claiming his mate even if he has to stalk the jaguar with patience.

However, time might be the enemy as the conflict with the jackals heats up and lives are put on the line

Review: Each book in the Wildcat County collection features a new romantic couple. To enjoy the overall story arc and crossover characters, I would recommend reading the series in sequential order.

This series is actually connected to another series, Peyton City. You will get characters from both series mixing together. I will admit that this series is very complex and somewhat complicated. I will also admit that I sometimes get the guys mixed up. This is one of those stories that you must read in order and not as a stand alone type of story. The story is that complex and very fast pace. For me it is a must to read them right before I read a new one otherwise my butt gets real lost with all the characters. There is quite a bit of new characters as well as old ones and it can be a bit confusing to figure out who is who and what is what. The story is real complex for me, but still fun to read.

Landyn is a jaguar shifter who doesn’t want a mate. He is so far in the closet that he fears coming out. The thing is, his mate just so happens to be a powerful lion shifter who is going to go all out to get him. Well one night, one sweet walk, and his jaguar takes the decision out of his hands.

Emil protects those around him and wants his mate. He knows deep down his mate wants him, but getting him to admit it might be too much. To top it of the jackals are at it again.

It is a very action pact series and you never know what is going to happen next. However it is also very hard to follow also. I had trouble figuring out who was trying to cause problems but damn it was fun to figure it out.

I had a lot of fun with this book and can not wait to start the next one. I would definitely recommend it and the others.