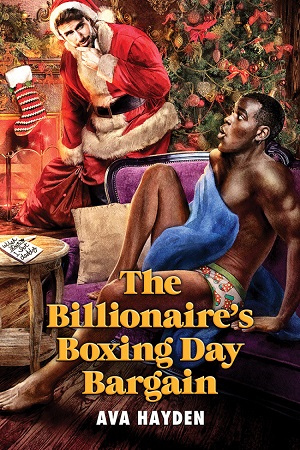 Blurb: Milo is too nice to say no when the desperate call goes out for more staff to work Boxing Day at Eden Consumer Electronics. It’s just until they sell the door-crasher specials, but it means he can’t see his billionaire boyfriend Lance until later that day.

Lance spends December 25 jetting back from a business trip, eager to see Milo. He calls as soon as his flight lands Boxing Day morning, only to find out that seven hundred and thirty televisions are cock-blocking him.

What’s the point of being a billionaire if you can’t spend your way around obstacles? Milo doesn’t want Lance solving his problems with cash, but he’ll never find out because Lance’s efficient personal assistant, William, is on the case. Unfortunately, even billionaires are subject to the law of unintended consequences—and these aren’t the kind Lance can buy his way out of.

Will Lance and Milo have their Boxing Day date? Or have Lance’s pushy billionaire ways finally gone too far?

Review: Milo wanted to spend Christmas with his boyfriend, but instead he offered to help his boss at work. Or should I say Boxing Day, which I have no clue what that is (*snigger* It’s the day after Xmas, we Brits celebrate it ~Pixie~). He has quite a bit to sell but too bad no one was shopping at his particular store. Lance is a billionaire with a hot boyfriend. A boyfriend that has to work. So Lance and his best friend William, decide to help Milo in a very intriguing way.

This is a very cute little story that was a blast to read. It switches from present time to when they had met, which at first is a little off. However once I figured out what was going on, not so bad. I hate to admit that even though this was a blast to read, it really didn’t come off all that Christmas type of story.

It is a fun story and perfect for when you need that quick burst of sexy into your day. I would recommend it.