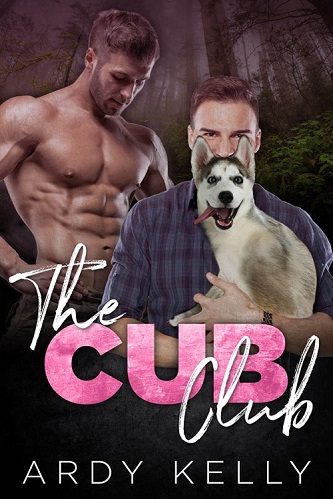 Blurb: What would you do if your adopted son shifted into a wolf cub before your eyes?

For single dad Steven the choice was simple – find the boy’s family and hope they had the answers.

As the alpha of Lone Wolves Ranch, Mack trusted in humans as much as he trusted in love. Not at all. But he had a soft spot for the brave human searching for his son’s relatives. When he discovers Steven is his fated mate, he’s stuck between a soft spot and a hard place.

The Cub Club is a gay wolf shifter romance containing Mpreg and knotting. A complete 65,000-word novel – no cliffhanger!

Steven’s husband had came across an infant and his dead mother, brought the child home, fought to keep him and raise him. They were a happy family until Steven’s husband passed away in an accident. Now thirteen years later Steven is in for one more big shock. His son has changed into a wolf cub. He needs to find his son’s birth family to find out what to do.

Humans have never been trusted nor allowed on the ranch. So when Steven showed up asking for help, Mack is tempted to run him off. That is until he realizes that the man is telling the truth. Then he realizes that Steven is also a wolf that can’t change, a recessive.

This story started off with what I had assumed would be an excellent story. However the alpha of the pack couldn’t stop lying to save his life, hid quite a bit and just made a mess of things. There was little to no heat between them both, however the author paired them up. The sex between them was suppose to be hot but it came off dull and dry. The knotting was the only thing exciting and even then it fell in delivery. It was hard to connect with any of them. Even the son’s reaction to his own father was wrong. There was little humor in it which to me makes a story pop out to me, but nope very little.

You don’t really get the recessive definition until a bit later in the story. However it is well written but didn’t stand out to me. The characters also fell a bit flat. Then there was Mack’s grandmother, she pretty much gave me the creeps through out. Also you get the title, Cub Club, but you don’t see it until almost the end of the story and even then you only see the guys for a few pages. Steven’s husband dies in an accident but you find a different solution later on, but just a mere mention of it. This story just left a lot of questions and very little answers. I did like Steven more than anyone else.

This is the first book by this author and while the story had a great promise, it failed to deliver. To much detail for a story when most could have been left out, mainly the ex. So I am sorry to say that this story was not for me.

Steven gets the shock of his life one day when his adopted son Peter shifts into a wolf. Not one to back down from a challenge Seven goes to the Lone Wolves Ranch for help where he meets Mack. Mack the alpha of the Lone Wolves Ranch assumes Steven is there to unload Peter on them. He is proven wrong by Stevens fierce determination to be thee for his son.

I liked the story. I thought it was great Steven was no pushover. I did not understand Mack’s need to lie to Steven. He should have explained everything upfront. Mack’s ex was a piece of work who I was surprised the pack let back in for a short tie given all that happened in the past.

All in all it was an intriguing story with humor, some angst, action and a whole lot of twists and turns with enjoyable characters that made for an amazing start to the series. I am looking forward to getting to know the lone wolves ranch pack better with each book that comes out.
Fantastic read.

2 thoughts on “The Cub Club by Ardy Kelly *Dual Review*”