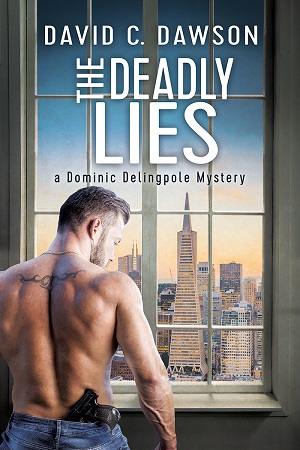 Blurb: Dominic and Jonathan are on their romantic Spanish honeymoon, and things are perfect… except Dominic has kept a secret from his husband. He’s failed to tell Jonathan that he plans to meet his former lover, Bernhardt, who is speeding on his way from Germany to present Dominic with a mysterious gift.

But Bernhardt is killed in a suspicious car accident. Shortly before he dies, he sends Dominic a bizarre text message that will take the newlyweds on a hair-raising adventure.Lies upon lies plunge Dominic and Jonathan into an internet crime that could destroy the lives of millions of people. What is the mysterious Charter Ninety-Nine group? And will their planned internet assault force Dominic to choose between the fate of the world and the life of his lover?

Review: These stories always follows Dominic and Jonathan. The first thing I am going to say is I can’t stand books that involve cheating and open relationships. I gave it a higher rating then I normally would do to the fact that it was a very interesting mystery.

Dominic was not having an affair but he was meeting an old lover for some mysterious reason. To bad his old lover is dead, and someone was after them. On their honeymoon that might end if it all goes bad. To bad Jonathan gets a bit over melodramtic when he finds out. Throws a hissy fit, when he is the one who likes to play around.

There are so many characters in this book, that it gave me a headache trying to figure them all out. I was glad to see Steve again, but really way to many characters and to much detail in certain spots. I like Dominic just fine, but Jonathan is a bit of a bitch to me. Wants his cake and to eat it also, but his husband cannot, just doesn’t sit with me. Although like I said above, can not stand cheating nor open relationships in any story.

So many different points of view is great, except for this part, it just gave me a headache. The mystery is top rated though, and quite a bit of secrets to hold. Secret societies, political corruption, murder, suspense and surprises are just a bit of what you get with this story. It is a very entertaining story that can keep you on the edge of your seat. Now the story does progress slow, but it turned out pretty good. It is a twisted game that is played.

Now the story does end in a cliff-hanger which is another reason the story did not rate so well with me. So for me, this story has great potential, but in some aspects of it failed. The mystery was top rated, but the rest could have been left to the side. Get rid of the open relationship, cheating, pissy moods and Jonathan could be a hit, but for now he is a drag. Dominic is a good guy but he also has just a few problems as well. So other than my issues with the story, it is a good strong read.

I did enjoy parts of it, and will keep my final decision for the next story.