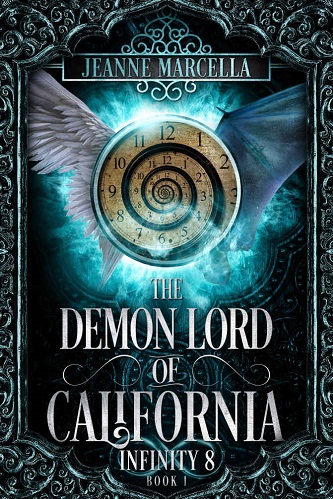 Title: The Demon Lord of California

Blurb: LGBT fantasy fiction. Stripped of his psychic powers, Calico Winghorse barely made it to 19th century Earth via his interdimensional portal. As a mixed-blood phoenix concealing himself in human form, he opens a bakery in the San Francisco Bay Area and quietly licks his wounds. But the unique method of his escape has drawn the unwanted attention of Infinity Corporation.

Representing this angelic-run company is Agustín Chávez de la Cruz, the Demon Lord of California. Even though Agustín is the corporation’s heir, he finds himself demoted from his daily duties for a new assignment: take absolute control of the portal.

​As Agustín formulates a more gracious avenue of acquiring Calico’s gateway, the demanding head of IC interferes, further complicating matters. From this unexpected interlude, Calico and Agustín realize they both wish to establish more than a mere business arrangement. So negotiations stumble along, all the while Calico ensures that the good people of the city are getting their fill of baked goods.

Yet due to Calico’s injuries, the portal remains vulnerable to the darker forces that want it at any cost. Agustín will have to push both his angelic heritage, and his own psychic powers to the very limits to mend someone who not only bears celestial blood, but who is also the god of space and time.

Review: I really enjoyed this story about two men who are very different from one another. Calico is hard to describe given the species he is made up of. I loved the psychic interactions between him and the demon lord Augustin who is half demon, half angel.

I have to admit there is a lot of detailed information throughout the story that helps the reader to visualize and progress through the book. But at times it seemed overwhelming a tad bit. Augustin confused me at one point considering who he is he seemed almost childlike when being put down by his father. Why he did not stand up for himself confused me. He’s an adult.

Aside from that I loved the story. It had a great cast of characters that added depth to the book. I am looking forward to seeing what else happens in the series and getting to know the characters more.