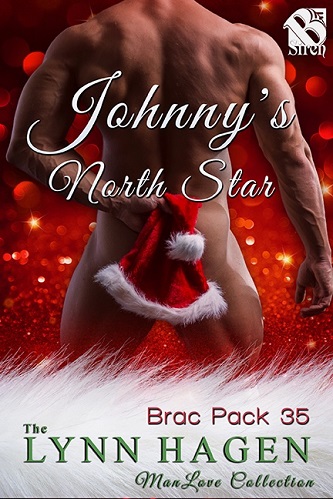 Blurb: Johnny Stone is the new art teacher at the local rec center. He might not know a dang thing about art, but he loves hanging out with the little kiddos. One particular child has stolen Johnny’s heart, and he’s determined to break through her little shell and become friends. When a snowstorm threatens Brac Village and he can’t get ahold of North’s parents, Johnny decides to give her a ride home. What he doesn’t know is that Santa has other plans, and once again the mates are in trouble.

Meanwhile, Brady Tryniski has returned home for the holidays. He’s also there to find a job. He doesn’t want to tell his parents that he was a failure in Tampa because they’re so proud of him following his dreams. To make matters worse, Brady is attracted to his dad’s new friend. When his dad blows a gasket and demands Brady stop seeing Harmon, the holidays turn sticky. But Brady refuses to give up his mate, even if that means his parents turning their backs on him.

Review: Each book in the Brac Pack collection features a new romantic couple. To enjoy the overall story arc and crossover characters, I would recommend reading the series in sequential order. This series is connected to Brac Village, Brac Pack Next Gen, Zeus’s Pack, Christian’s coven, Demon Warriors and many more.

Johnny and Hawk have been mates for a very long time and they were truly happy. However there was one thing Johnny wanted most of all, a child. Santa is on his way, lets see what happens. And at the same time Brady is falling for his fathers friend. However it turns out that Harmon is more than what he thinks. Brady is Harmon’s mate. Now if only his father would except it.

Santa has an evil brother, who knew. First off I was glad to read about Johnny once more, he is always a gift to read about. Now I liked hearing about these guys, but the way it was written made it come off jumbled. You hear about Johnny, Hawk and North, then switch to Brady and Hamon. This went back and forth till the end. I didn’t care for it and it made the story go down in regards to it. Had it been one story and then an extra story at the end it would have been better off. I also think that Brady and Hamon should have just gotten their own full story instead of a hit and run.

Over all it was adorable but it didn’t do much for making me love it. I guess no one can be a complete hit with all their stories but this one just made a big flop for me.