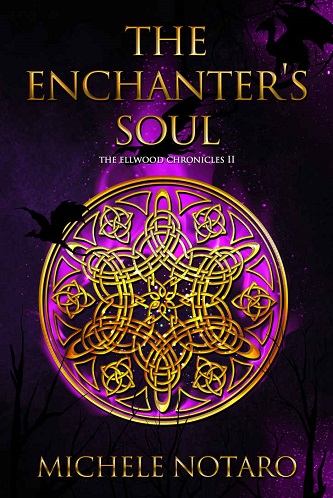 Blurb: Many fall as the last enchanter rises…

The first line of the ancient prophecy keeps playing over and over in my head, but I’m afraid to remember the rest. I don’t want to think about what’s coming for us—what’s coming for him. I’ve been keeping Brinnswick safe for years; I’ve been keeping my coven safe my whole life; and now I was responsible for keeping Sebastian safe, too. It shouldn’t have been a problem, he was my vitmea viramore, after all, and I was used to having the weight of the world on my shoulders.

What Seb doesn’t know is that everyone in the magical community is after him—even if they don’t realize it yet. They’ve been looking for him for centuries; not only for him, but for his soul. But they never counted on him having me. I will protect him with my every breath and take down anyone that gets in our way. His soul belongs with me, not in the arms of evil.

The Enchanter’s Soul is the second book in The Ellwood Chronicles and is a continuation of Sebastian and Ailin’s story. It contains explicit material and is intended for mature adults 18 years of age and older.

Review: This story is told in different POV’s. Ailin and Seb get to know one another while at the same time Ailin is keeping secrets and Seb is refusing his magic. There is a great cast of characters that add a lot to the story.

I did feel there was a bit much with the declarations between Ailin and Seb. Believe me I got it the first time they said it. New family members arrive and Ailin makes peace with Emrys. I loved how family and friends embrace Seb to the point of him finally having the courage to accept what is destined for him.

A great read and addition to the series.