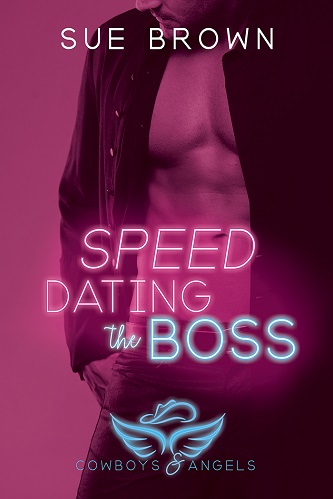 Blurb: Will a mix of privilege and blue collar be a recipe for love… or disaster?

Dan’s pretty satisfied with his job at the working-class bar Cowboys and Angels. He enjoys his simple life, his apartment, and his cat, but he could do without the fights that break out in the bar, his boss’s meddling daughter, Ariel… oh, and a brutal, unrequited crush on his straight alpha boss, Gideon.

When Dan’s friend prepares to tie the knot, everyone insists that Dan needs a date for the wedding. Before he can protest, Ariel arranges a gay speed-dating event at the bar with Gideon as a participant. The unforeseen revelation that Gideon is bisexual raises Dan’s hopes, especially when Gideon announces that he wants to accompany Dan to the wedding. Could Gideon really be interested in Dan?

When Dan needs someone most, Gideon offers his unconditional support, and with genuine commitment, he shows Dan the kind of man he really is. Teaming up to save the wedding from a hungover groom and intolerant parents, can Gideon convince Dan they’re the best match since beer and pizza?

Review: Speed Dating the Boss is the first book in Sue Brown’s series, Cowboys and Angels. I’ve become quite a fan of Brown’s writing, particularly after her Island Medics series and her contributions to Dreamspun Desires. I find the characters so relatable and easy to sympathise with, I also love the romance, which isn’t insta-love and is sometimes a slow burn.

To be honest when I see a series called Cowboys and Angels I am going to stop for a second look, no matter who the author is. I have a weakness for cowboy romances. However, this was not a cowboy romance and I was in no way disappointed about this fact. Instead this is a series that is based around the world of a city bar called Cowboys and Angels, which is owned by Gideon.

Gideon is introduced to the reader through Dan. Dan is the lead bar tender and has been working at Cowboys and Angels that he could run the place with his eyes closed and without his boss. Gideon is a widower with a college aged daughter, Ariel, who he has spoiled after the death of her mother years ago. Gideon is a man of many surprises. He may run a red neck bar, but he is a man of money and his hands in many pies.

Dan is invited to a wedding and needs to bring a date. Dan has devoted so much over the years of his time to the bar that he has no time for dating. He also nurses a crush on his seemingly straight boss. With not a lot of options and a hare-brained scheme concocted by Ariel, Dan allows his boss’ daughter to help him find a date.

The area where the bar is located is a little rough. So, having someone – and someones – out and proud isn’t something that happens really in Cowboys and Angels, but Dan and Gideon are not only realising their feelings for each other they are also changing their little world around them for the better.

This was a light-hearted read but the complexity of the characters is deep, which is what I enjoyed about the book so much. There was chemistry between Gideon and Dan from the start, they have very interesting and driven personalities that compliment each other more than they clash. While this isn’t a slow burn romance, the romance does come around slowly. Dan needs to sort his feelings out, as does Gideon, but they also need to get to know each other better, beyond a friendship between boss and employee.