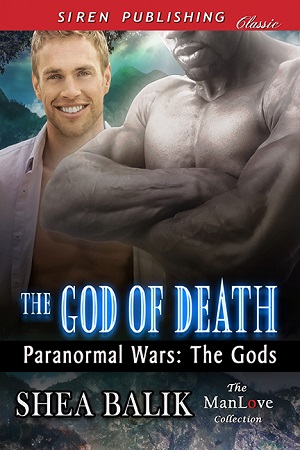 Title: The God of Death

Blurb: Life as an immortal might seem like a dream come true, but for Tular, the God of Death, it was frustrating. His fellow Gods insisted on getting involved in the mortal realm and mucking things up. It didn’t help that love never seemed to be in the cards for any of them. So, when he felt a pull to the mortal realm, he was stunned to find himself drawn to a human of all people.

Joren didn’t know how much more he could take before he fell apart. The Paranormal War had killed his parents, destroyed his home, and left him devastated and unsure about his future. But it was as he sat there praying, his entire world imploded, for he opened his eyes to find the most terrifying man in the universe standing there staring at him – The God of Death.

So why did Joren want to curl up in the God’s arms? More importantly, why did he find himself desperately wanting to be kissed by him?

Review: Each book in the Paranormal Wars: The Gods collection features a new romantic couple. To enjoy the overall story arc and crossover characters, I would recommend reading the series in sequential order. In this case this series is a branch off from Paranormal Wars: Stone Haven and Paranormal Wars: Juarez. I would start with those series first.

A war has been started, nuclear bombs were set on innocents, just because the Psy paranormals wanted the others eliminated. Thousands died and for what, power. Joren has lost his family and so many innocents, but his heart leads to forgiveness when others want revenge. His prayers lead the God of Death to him.

Tular is the God of Death and damn if he is not pissed off. Human’s caused problems and killed each other off. The Gods decide to create the paranormal’s to even it out, but it only causes more death. Now that death has led to thousands and thousands of innocent victims. He is pulled into the mortal world and leads him into his future.

The scrolls say that life began when the threads separated, and searched for each other. Paranormal’s were given mates, so one should expect the gods to be given too. However their heads are shoved so far up their own asses that they do not believe. That is about to be proven wrong.

Fascinating story with just a hint of dark tones to it. Pretty unique names given to them as well. I liked the danger and excitement that these stories have in them, but this one needed a bit extra kick to it, which it did not have. Other than that, this story pretty much rocked. I am not sure about being mated to the God of Death, but figure it was a perfect beginning to a new series.

I enjoyed it quite a bit and look forward to watching the other Gods go down, so to speak. It is a very fun story and I can guarantee that you will enjoy it also.