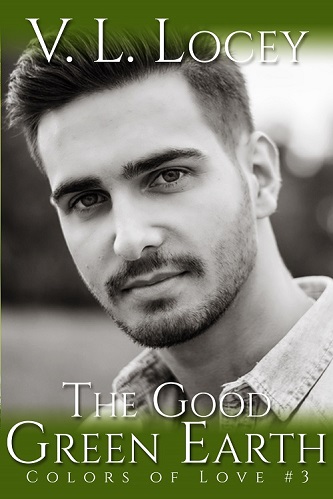 Blurb: Will their attraction grow into something deeper, or will it wither and die on the vine?

Review: The Good Green Earth is the third book from VL Locey’s Colors of Love series, which is based around the lives of men from various teams of the AHL (this is the development teams that feed into the NHL). As the characters aren’t related this works as a standalone book, but so far this has been a fantastic series so I also recommend going back to the previous books if you enjoy this one.

For those readers that have become attached to many of Locey’s ice hockey romances, The Good Green Earth is a wonderful book to add to your list. I don’t hide the fact that I adore Locey’s work, particularly the hockey romances of recent years.

For others unfamiliar, but love a sweet sports romance, I highly recommend this. This also deals with themes that I know will attract many readers, including main characters with an age gap, enemies to lovers, moving on after the loss of a loved one and addiction.

Nathan Zinkan is known as a the AHL’s wild one, having been arrested previously for a DUI, another arrest after his team wins the championship has Nathan in front of a judge. Nathan had hoped that his lawyer could get him out of any trouble, but instead the judge gives him 1000 hours community service at a local community garden centre.

Then Nate meets Bran Cavanaugh, the older man that owns the garden centre and the men that will sign off on Nathan’s community services hours for the court. Nathan’s laid-back nature is at complete odd with Bran’s more conscientious outlook on life.

Both men have their issues and they undergo an intense but satisfying character development. Bran is dealing with the loss of his husband, the people in his life tell him he needs to move on but Bran is simply not ready to let go yet. As for Nate, he doesn’t think he needs to get his shit together, and he acts like a resentful, spoilt child at first when he first arrives at the garden centre. But he needs to battle his own demons and recognise that he has issues when it comes to alcohol.

This book is an emotional roller coaster, but it’s a great read with hugely relatable characters.