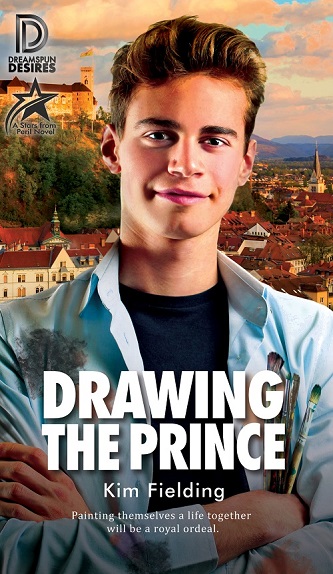 Blurb: Painting themselves a life together will be a royal ordeal.

Small-town boy Cal Walters doesn’t know whether he owes his phenomenal success as an artist to talent or to his connections to famous people. Doubt leaves him secluded—until a lost bet lands him on yet another blind date. But this one is different.

To Teofilo Vabriga-Kastav, playboy prince of the tiny nation of Porvunia and passionate art lover, Cal’s paintings are as intriguing as Cal himself. When Teo invites Cal to his country for an art competition, a whirlwind romance sweeps them up. But it can’t last—loyalties and obligations bind them to lives that are worlds apart.

Cal and Teo might’ve found their perfect complements in each other, but to hold on to their happiness, they’ll have to get creative.

Review: Drawing the Prince is the third book in Kim Fielding’s Stars from Peril series, which is released as part of the Dreamspun Desires house line. The series has been very enjoyable for anyone that loves a good light-hearted romance, but also as a fan of Fielding’s writing, I was more than satisfied to read the present instalment to the series.

The book works as a standalone, although there is mention of the previous two characters who are also the “Stars from Peril”. It’s a pretty cool concept, one small town in America which has produced (at this point) three celebrities – a rock star, a style guru and now an artist. Each man is gay and gets his own chance at a HEA. The artist being the subject of Drawing the Prince, obviously.

Cal Walters has become a wildly successful artist, in some part he is sure that he can attribute this to his fellow Peril celebrities, but of course he also has a measure of talent that has also made his work and commissions highly sought after. Despite his success he doesn’t have a lot of self-confidence, he doesn’t really date a lot either. The only reason he’s being sent on a blind date is because he lost a bet. Cal didn’t expect the attraction he felt to Teo, who comes from a small European principality of Porvunia (which had me thinking back to the first book in the series, The Spy’s Love Song). Teo is not only an engaging man, he is also an art lover and particularly admires Cal’s talent. Cal assumes that Teo works for the government of Porvunia, not realising that he is a prince (and an openly gay prince, to boot).

Teofilo Vabriga-Kastav (that’s a mouthful and a half), is known as a playboy prince. He works hard for his homeland, but he also knows how to appreciate the finer things and people in life. He’s been drawn to the American artist Cal Walters for a while and to meet him on a blind date is an opportunity Teo refuses to squander.

This is a fairy tale romance, so I’m not going to go further into details and spoil everything. However, if you’re one of those people that can’t resist a corny Christmas movie about Princes and Princesses and commoners, or books and movies that generally are about wealthy aristocrats/royalty falling for a “commoner”, this book will appeal to you and make you happy.